The blog will be back to its home in rural western New York in a few days. Of course the heatwave is predicted to break just as I leave. Currently we are still dripping and sweltering and fanning ourselves with anything that comes to hand, sleeping with ice packs instead of hot water bottles and in one friend's case, in her back garden.  "Put your bed socks in the fridge" a newspaper said helpfully. Bed socks? In this weather? Britain isn't geared up for high temperatures. A few trains are air-conditioned; most are a rolling steam bath. I never thought I would miss American air conditioning, usually the bane of my life. 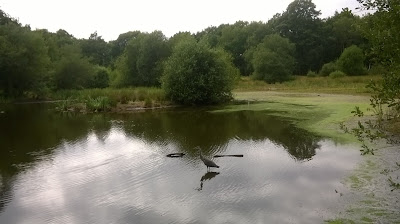 This picture of a heron on Wimbledon Common was taken a couple of weeks ago. Now it's just a patch of mud, the heron still picking his way around looking for snacks in the goo.
Meanwhile the weather seems to have affected London life in more ways than one. The other day I walked down South Molton Street and Bond Street - at one time pleasant shopping areas, to be accosted every few yards by someone yelling aggressively from one or other of the shops, "Madam!", thrusting free samples at me and trying to entice me in to spend money. Just like those little boys in Turkish and North African soukhs and carpet bazaars used to rush after me shouting "Special price, for you, Madam,special price!" Must be the heat.
Posted by Alenka at 9:14 AM No comments:

As the country swelters and grass turns white with drought and SW19 winds up the tennis championships and the crowds in straw hats depart for another year, here's a taste of an altogether gentler Wimbledon pastime. A couple of weeks ago, they advertised a "Nature Walk" on Wimbledon Common. It was part of a weekend of nature-related activities, including some unexpected exhibits. 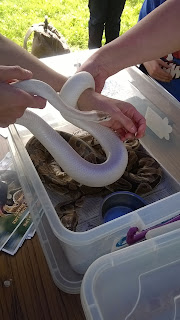 I was relieved to hear that the pythons, one of whom was called Olivia and corn snakes don't live on the Common. They are rescued abandoned pets. Pets!! Who in their right mind...? Oh, OK, I never was in touch with the zeitgeist.
Then on to more bucolic ramblings among the giant hogweed. Everyone was instructed to look for insects. Well what a microcosmos is a patch of weeds - I had no idea. 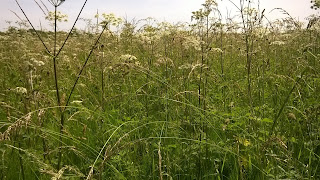 There were bees and beetles and grasshoppers and caterpillars. That staple of the British countryside the stingy nettle (Britain's far gentler equivalent of poison ivy and the bane of small children who learn from an early age to look for dock leaves to rub on the sting. Or used to, anyway) is in fact home and nourishment to the caterpillars of the Peacock Blue butterfly. I'll never look at a nettle in the same way again. Kids were handed out butterfly nets. 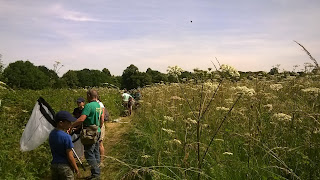 And gambolled around like a scene from a Victorian children's book. They seemed to love it. It beats computer games any day. So nice they still encourage old-fashioned pursuits. Here's some willowherb. 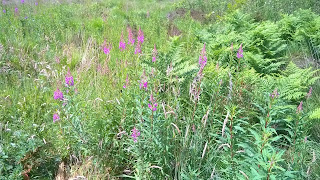 And there was I thinking Wimbledon Common didn't have any flowers. And the best thing about Wimbledon Common - there are NO TICKS!  You can stride through the long grass with impunity.  Eat your heart out, western New York!
Posted by Alenka at 2:22 PM No comments:

London is roasting in a heatwave. Just like the old (possibly spoof) newspaper headline that hubby likes to quote: 70 Degrees Again and No Relief in Sight. Except it's more like 80 degrees with a stiff breeze. Wimbledon tennis started yesterday and on my journey down Wimbledon Hill on the 93 bus, I've been watching incredulously hordes of red-faced perspiring people, all bedecked in sundresses and panama hats, struggling up the hill mopping their brows. Some bright spark (probably an 18-year-old fitness fanatic) put on a sign at Wimbledon station that it was 20 minutes' walk to the tennis. In your dreams. I hope they all got there with the minimum heart attack quotient. I have the best idea. I watch on television. Meanwhile, as an antidote to the heatwave, here's a flashback to an interesting corner of Wimbledon called Cannizaro Park, home to some magnificent rhododendrons. 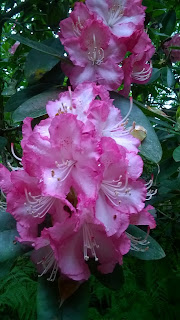 The day I visited, some weeks ago, it was after a torrential rainstorm (remember rain). Most of the blooms were soggy and nearly spent, though this one had a way to go. 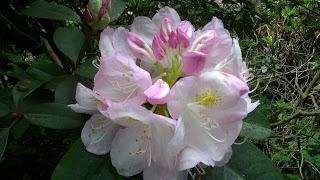 The vast rhododendron garden was a wilderness of dark, damp paths, old steps and memories. It belonged in a Gothic novel. 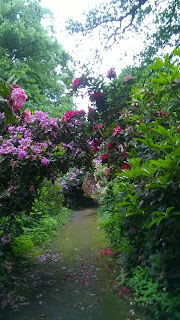 It took me a while to find it - I'd strayed into some bleak, bare, walled gardens that looked as though they'd seen better days - perhaps they've perked up now it's summer. I could see rhododendrons enticingly peeing over the top of the wall but there was no secret door under the ivy. I had to tramp all the way round. But it was worth it. 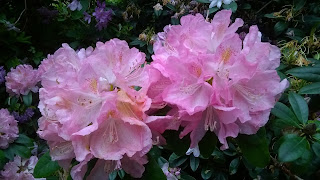 You could explore here forever. 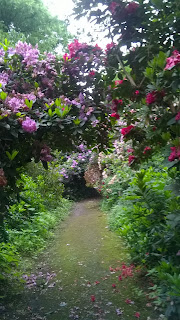 And cheerfully get lost in the wilderness. 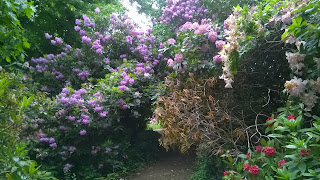 There was a Gothic-looking aviary, full of birds 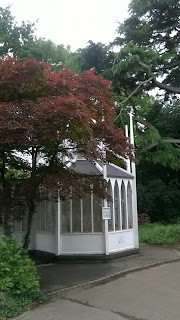 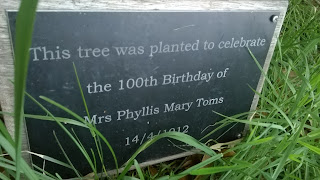 in case you were wondering, the giant teapot is a work of modern art. 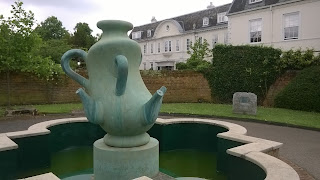 In the background is Cannizaro House, named after a Sicilian Duke who once lived here. It's now the Hotel du Vin, probably doing well out of the tennis.
. 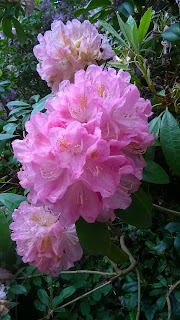 Tennyson, Oscar Wilde and Henry James all stayed there. The whole lot was sold to the council in 1948 for 40,000 pounds. That wouldn't even buy a parking space these days.

Coming up: Close by, a different great outdoors experience. Watch this Space.
Posted by Alenka at 12:56 PM No comments: