The blog is on a family visit to London for a few weeks, so once again apologies for the erratic service. Keep watching this space.
At last we have some decent weather here - the British spring has been much later than usual. 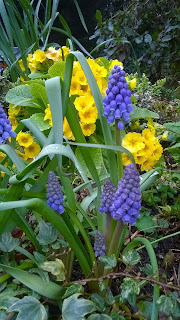 But there have been pretty sights, including some magnificent magnolias. 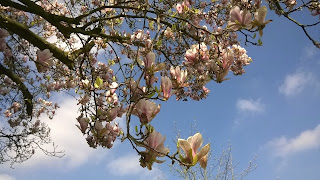 These are different fom the tall monsters you get in the southern US and quite often get blighted by frost - but not this year. Since I've been here there's been cold and rain but not a lot of frost. 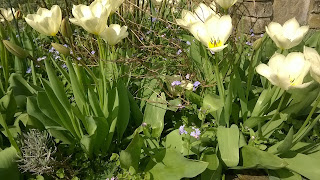 It's been good to hear British blackbirds singing. They really know how to hold a tune, unlike American ones, which sound like rusty hinges.  The last couple of days have been seriously warm and Brits not quite sure what to do about them. Amusingly, the tubes and trains are displaying signs, "In this hot (sic) weather, make sure you carry a bottle of water." How we ever survived in the old days without ubiquitous bottles of water, I can't imagine.
I have noticed one thing though - the return of people bringing nasty smelling food onto the trains. There was a plague of this when I last lived in London and then things got better. Now a new generation have to be taught manners.  And food has got much smellier. It's not just McDonalds and fish and chips any more. There's always something to make travel on public transport more pleasurable. But I shouldn't complain. In rural western New York there is no public transport - or none that I've noticed.
Posted by Alenka at 7:22 AM No comments:

I can't help it - my mind keeps dancing back to Florida and our beloved Golden Beach, now undoubtedly sweltering in glorious spring temperatures. The winter orchid tree in the front 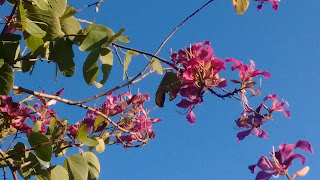 will be giving way to the spring one at the back 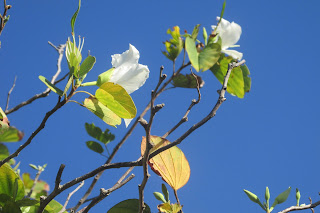 which already had a few flowers before we left at the end of February.  I had been feeling nostalgic when I saw  this exciting story from up the road in Nokomis. Yes, once again, a giant alligator found its way into somebody's swimming pool.  That's the sort of thing that happens in Florida, which can be edgy where wildlife is concerned. I still remember that bobcat sauntering towards me at our beach access. The alligator was more ammunition for hubby, who has a long list of reasons why we should not join the countless residents who dig up their back gardens to install, as he puts it,  a glorified bathtub so they can stand in it when the weather gets hot. "Another reason not to have a pool", he said smugly.
Posted by Alenka at 3:56 AM No comments: