Our first day this summer at Buffalo Marina and what on earth was going on? 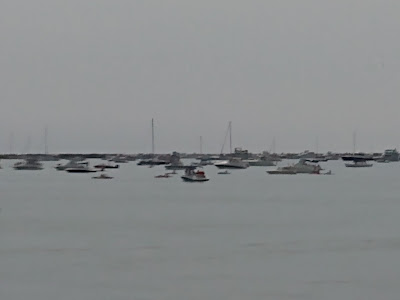 Every boat that could float seemed to have put out into the harbour and dropped anchor. It made me think of what Dunkirk must have been like.  What was going on? Well apparently there was going to be an air show, the first time thy'd held one at the harbour around the corner. Tickets were 149 dollars - to park your car and sit next to it. That is if you could get a ticket. They were all sold out. But those people should be kicking themselves - forking out 149 dollars when you could get a perfectly good free view from the park by our marina. As it happened, quite a few people had worked that out. 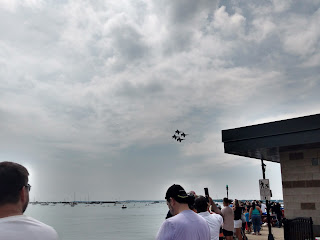 We chugged out in Titanic 2 and dropped anchor alongside the other boats but it was a bit of a windy day and we were rolling about all over the place, so we headed back and joined the crowds in the park.

The big attraction were the Blue Angels, which were the US Navy equivalent of our Red Arrows. The previous day they'd had to cancel because of fog and we wondered if the cloud cover might not be too much again today. Then someone shouted, "here they come!" 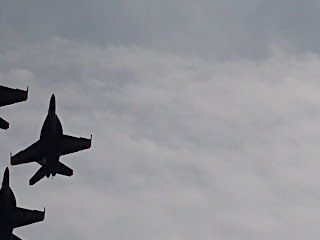 It's not easy to get a  close-up of fast-moving planes with a cheap smartphone but I got a bit of them. The longer shots were slightly more successful. 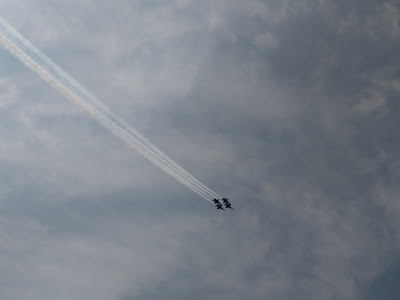 I was a little disappointed that there were only four Blue Angels. The last time I saw the Red Arrows there were at least six. But they made up for their lack of numbers by putting on a heart-thumping show that lasted nearly an hour. Perhaps it's still going on. 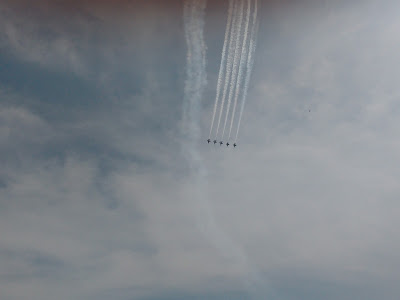 Some things in life are still free. 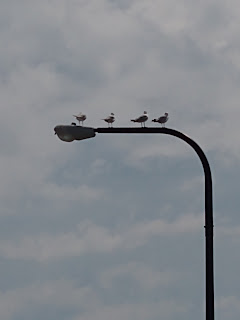 Though they weren't impressed of course.

Posted by Alenka at 8:25 PM No comments:

After July 2021,  Google will no longer be sending out automated emails to let you know of a new post on the blog. The blog itself will continue as before. If you want to continue getting email alerts, please send me a comment to the latest post containing your email address, which of course won't be published.  Keep reading! All the best, Alenka.

Posted by Alenka at 3:20 PM No comments:

Well, friends, we all have our fantasies. I've had several over the years but my current one is to own a bit of forest. Where I can commune with nature and indulge in that delightful Japanese pastime called "Forest Bathing."  Around here that shouldn't be as difficult as it sounds. There are forested hills everywhere around us and land has always been pretty darn cheap, as they say. 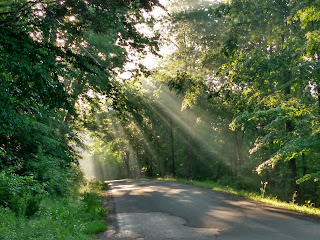 We even have a small forest at the end of our back garden, which is delightful in its way and if you position yourself right you don't see another house. The only trouble is that you never know when our lawn-mowing neighbours will start up their infernal machines, which must be the loudest in the eastern United States and are only exacerbated by the echo from the aforesaid surrounding hills.We actually have to shut all our doors and windows when they're at it.  Peace and quiet cannot be guaranteed. So I found myself idly perusing the local property listings. Perhaps there might be a few isolated arboreal acres going for a song and if they came with a pond, so much the better. Well, did I get a rude awakening. Every scrap of land listed was already under offer - and some, with a basic house attached, were going for hundreds of thousands of dollars. Being a pessimist and inveterate conclusion-jumper, my first terrible thought was, "Yikes, someone's buying it all up for windmills!" (A scourge we have mercifully escaped in our immediate vicinity, thanks largely to a neighbour who will one day be canonised, who refused to sell.)

"No it's not that, said an estate agent friend, "It's two things - Covid and the economy. Covid has driven people to snap up anything that lets them be in the great outdoors. And the economy is so uncertain people are putting their trust in land. "Like Scarlett O'Hara," hubby remarked.

Oh well, perhaps all the townies buying up forests will get tired of their new investments and want to unload them. But then again, I suppose I'm a townie trying to buy up a forest too.

And I suppose it will have to remain a fantasy for now. And our own little forest isn't half bad - after the lawnmowers have done their worst.

Posted by Alenka at 3:02 PM No comments:

As my American friends say, I just had to share this. I went back to my car after shopping at the supermarket and another vehicle had parked next to mine.  I did the proverbial double take. Not wanting to be too conspicuous, I snagged a quick photo from inside my car. 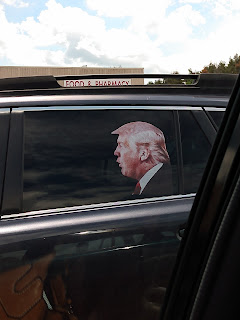 Of course this is rural western New York, not California, where the window would probably no longer be intact.
It must be a new fad. Hubby said he saw the Queen going down US41 in Florida. Perhaps she was having a surreptitious, if well-earned holiday.
Posted by Alenka at 4:48 PM No comments: