The red tide is still a lurking presence; I haven't felt it in the air but there was one dead fish on the beach this morning. It was a windswept day and the sky was particularly lovely. 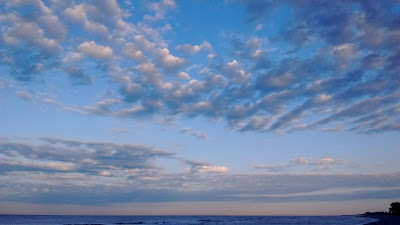 Not to mention the Gulf of Mexico, 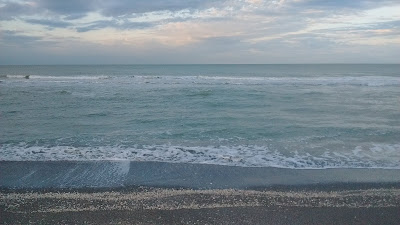 especially as there was no one else on the beach save a lone walker and a lone fisherman, a bandanna over his face against the north wind. (They need a bit more than a bandanna up in western New York right now, where "life-threatening' conditions are predicted. I'll never complain about red tide again, though it has, according to the man at the local cable company, led to some nervous and half-asphyxiated people selling their beach view condos. Might be a chance to pick up a cheap one!)
But the wind served a useful purpose, chucking up a great crop of shells. 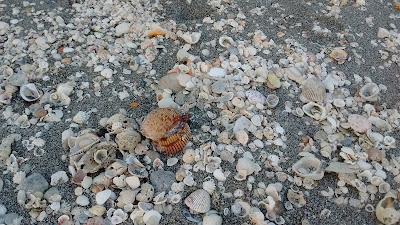 I can't resist collecting shells but what does one do with them? There's just so many jars you can fill and I can't stand the kitschy things people make out of them, the picture frames and necklaces and model lighthouses. Someone in our neighbourhood has a mailbox made entirely out of shells. Often I scatter them on the flower beds, just for fun.
But today I found my very first sand dollar. 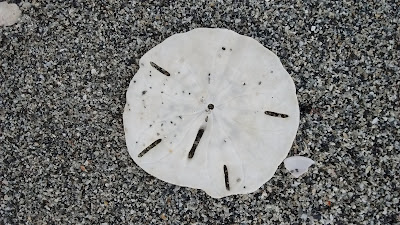 All the years I've been walking along Golden Beach and I've never found a sand dollar before. I almost thought it was a fake, studying the almost too perfect pattern of petals that look like an etched flower - you can just about see it on the photo below. 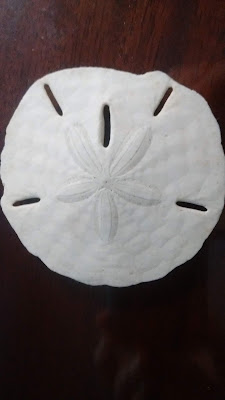 But it was real all right. The remains of a sort of flat sea urchin.  In its bare and bleached state, the  sand dollar, I discovered, takes on some extraordinary symbolism. Among other things it's said to represent the Star of Bethlehem, the holes the Five Wounds of Christ and the flower an Easter Lily. As hubby would say, how about that!
Now I need to think what to do with it. The flower bed is probably not a suitable place.
Posted by Alenka at 7:06 PM No comments:

I don't know what it is about me and dogs - or rather dog walkers. Back in Blighty, I've had trouble with them on Wimbledon Common, I've had trouble with them going up to Holy Communion at Brompton Oratory (yes, really!) and here I've had  trouble with them on the beach. I was sitting happily reading and minding my own business when along came a woman with a dog on a lead, trotting right past me along the water's edge. "Do you know dogs aren't allowed on the beach?" I asked helpfully.
"Thank you",  she said and continued on her way.  "There's a dog beach just down there", I pointed. She didn't seem at all interested. The rules, of course, did not apply to her.
Due to the dog beach and such, this place is already canine heaven. 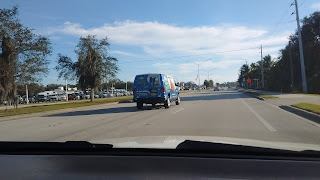 The van we saw on the road the other day was advertising a pet resort, with every luxury. "Pets so Pampered You'll Wish You Could Stay". They know their market. So often you see dogs in push chairs, or little trailers where there'd normally be a human baby, dogs wearing babygros (onesies to Americans) raincoats, sunhats and bright bandannas. It doesn't take a psychologist to work it out.  So many people here are retired and lonely and far from their families and grandchildren. Dogs become baby substitutes.
I have nothing against dogs - in fact I like them a lot - in their place. And their place is not the beach. And it's especially not the supermarket. I was in our local one last week when I spotted a woman with a dog on a lead. She appeared to be in fine fettle and in full possession of her eyesight and was happily trying samples at the tasting counter, the dog, with nothing to identify it as a "service dog", snuffling at her heels. When I complained to the management, I was told there is very little they can do. They are simply allowed to ask if the dog is there because of a disability (not what the disability might be) and what the dog does for its owner. The popular answer these days is, "He's an emotional support dog. I need him because I'm anxious going into the supermarket." Apparently you can buy the little official jackets on the internet. And there's darn all the supermarket can do about it for fear of being sued.
Now this was probably a perfectly nice woman and a perfectly sensible dog. And for all I know she may have had a genuine  problem. But my argument is that if everyone decided to bring their dogs into the supermarket for emotional support, (and heaven knows, we all need emotional support in the angst of the checkout queue) there would be mayhem. Aside from the hygiene issue, it's hard enough, in high tourist season, manoeuvring your trolley around other people's without getting it tangled up in dog leads too.
I believe the airlines are starting to fight back on this. (On any flight to Florida you'll be lucky not to be sitting next to a dog providing emotional support and getting  a free ride for its trouble.) And more power to their elbows. And the sad thing is, that the more people's goodwill is abused, the more difficult it will be for those with genuine disabilities - which may well be hidden ones - to be believed.
Posted by Alenka at 8:12 PM No comments:

As the "snowbirds" all pour in and Florida gets so crowded you think it's going to collapse into one huge sinkhole, there are still the quiet places. 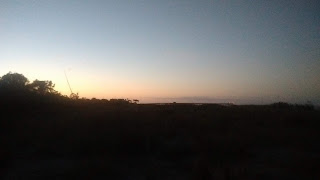 I wasn't the first to walk on the beach this morning - there were footprints in the sand but I had it mostly to myself. 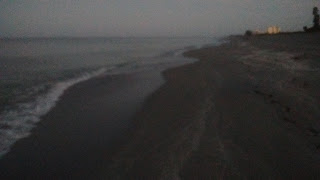 Except for a solitary figure who seemed to be looking for prehistoric sharks' teeth. 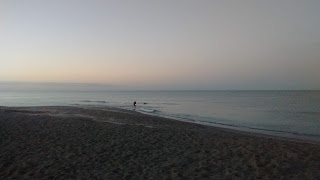 I haven't seen so many sharks' tooth prospectors lately, though the red tide seems to be far less of a problem now. I didn't spot any dead fish - although it's possible there just aren't the fish numbers any more. The pelicans haven't returned in force - that's meant to be a sign that all is well.
The other evening we heard a talk by someone from the Mote Aquarium - they do sterling work with the local sea life. Though I wonder at all the trouble they go to with dolphins, for example, taking blood samples, (which get sent to the human hospital) putting tracking devices on them, monitoring their diets and so on. It's mostly funded by donations, so people obviously support it. I wonder if the dolphins see it as an invasion of privacy. Sadly six dolphins have been lost in the red tide. The speaker told a story which proves there's no end to human stupidity. A dolphin called Beggar used to hang around our local coastline, scrounging for food, despite Do Not Feed signs. It proved irresistible to sightseers and obsessive feeders who turned up in droves. The Aquarium staff spotted one man actually holding his baby over the dolphin's jaws. They just rescued the baby in time.
Posted by Alenka at 10:55 PM No comments:

The scene outside our front door the other morning. A crescent moon, a morning star.  Nice. 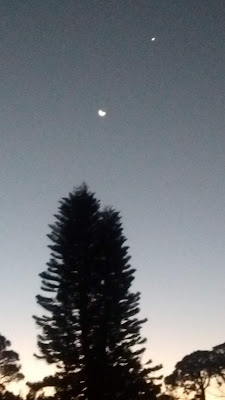 And a last look at Epiphany Cathedral's decorations. Happy Feastday for yesterday! I presume these were gold, frankincense and myrrh from the Three Kings. 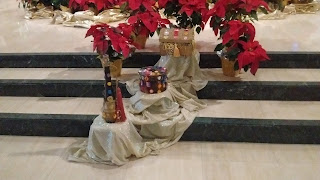 And here they are in front of the stable. 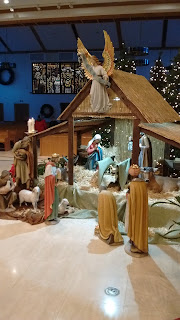 And now the fun starts. The street on which the Cathedral lies is the latest to succumb to the town's beautification (sic) project. Elsewhere, so far, this has meant months of chaos and disruption, dust and dirt plus serious loss of business for the shops and restaurants and the toppling of several beautiful palm trees. They assure us it's all in a good cause.  When it's all finished it better look a lot more beautiful or there'll be hell to pay. With Tampa Avenue now being dug up, it's going to make it an adventure to plan a route to the Cathedral.  Church car parks are notorious enough as it as, particularly when everyone's in a hurry to leave. Now if half the town starts using the Cathedral precincts as a rat run, it'll be anarchy.
One thing I can guarantee. It'll finally all be finished on the day we leave to go back Up North.
Posted by Alenka at 5:19 PM No comments:

On Cops and Donuts 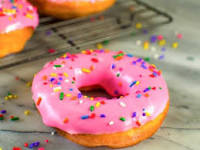 I loved this story about police mourning a doughnut truck on the BBC. But it should have had some context. Is this one for Culture Clash Watch? Do my British friends get the joke? Every American knows about the fabled affection of US law enforcement for doughnuts (or, more properly, donuts.) There's some truth in it. Pass any doughnut place in America and it's fairly likely you'll see a couple of police cars parked outside, their contents taking a little break to chew the fat (and the sugar). And there's the famous anecdote about the trial witness who, when asked what he did after seeing the crime, said, "I ran straight to Dunkin' Donuts."
"Why did you do that?"
(Puzzled at the question) "Because that's where the cops all hang out."
Nice to see the much maligned American cops sending themselves up.
Posted by Alenka at 10:06 AM No comments: