Proof no (#) 946577348 that I am a foreigner. I finally plucked up the courage to use one of these machines (actually not these very machines but the one outside the YMCA) to buy a newspaper. Americans, of course, have grown up with them. Literally, if you look at the state of some of them. 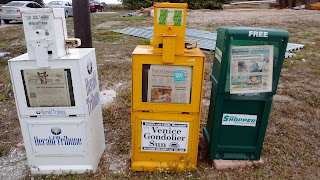 It should be easy. You put in four quarters (the largest coin and simple to spot) and you get your paper. So that's what I did. The money all fell in with a nice clinking sound but then I found my nemesis. 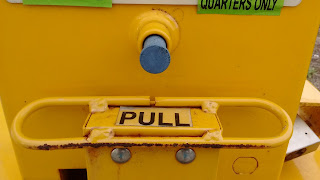 "Pull" it said. But what do you pull? Is it the knob or the handle? I made a poor choice, as Americans say and pulled the knob. Wrong. By the time I realised I should have pulled the handle, the thing had seized up. It happily swallowed my money and no amount of pleading, begging, banging and kicking would make it cough up the paper. And yes I did check to see there were actually papers in it, as a friend suggested helpfully afterwards. I was able to work that out for myself.
Determined not to be cheated (a dollar is a dollar after all and it's the principle of the matter) I marched into the local newspaper office, which immediately made me feel nostalgic for my old days as a hack. They were very kind and gave me a paper. I asked if there was any way I could get the paper by some other means, apart from having it delivered, which wouldn't make sense as we aren't here for long enough. Were there no corner shops or newsagents in America? The receptionist said there were such things as "convenience stores" that might sell newspapers. I will have to seek them out as I'm now phobic about losing any more of my money to the maw of the yellow peril. My friend consoled me with the interesting information that lots of Americans find the things sometimes seize up on them as well. They are obviously more patient than I am.
Posted by Alenka at 7:22 PM