You never know what you're going to find at Golden Beach. I was about to walk out through the beach access after my sunrise jog this morning and spotted something between the benches that didn't look as if it belonged there. 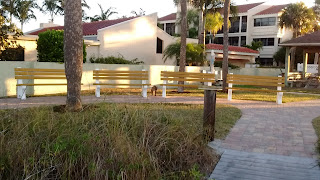 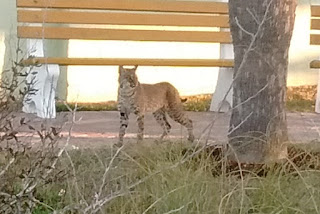 It was a big bobcat, completely unperturbed. He spotted me and instead of scarpering, started to saunter towards me.  He looked as if he wanted me to tickle him under his chin. 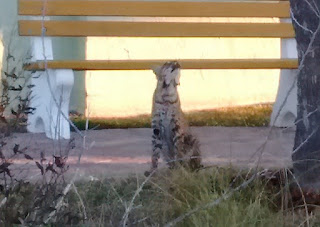 Remembering the recent shenanigans reported in the local paper when one of his relatives broke into someone's house and nearly zombified the inhabitants, I was disinclined to oblige.  I retreated to a safe distance and waited for him to go away.  He certainly took his time before loping off in the direction of the next door block of flats. Lock up your dachshunds.
I thought the wildlife in rural western New York was exciting but this place is a veritable zoo. As well as the enormous coyote spotted last week sniffing around the dustbins round the corner on Coral drive, I've encountered, an armadillo, big black snakes on the patio and far too many rabbits and squirrels. Not to mention the neighbour down the road who was out sunning himself the other day. 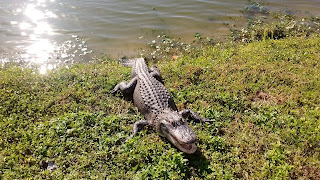 And that's even without the birds.
Posted by Alenka at 12:59 PM