The Pleasures of Modern London Part One

Include Morris dancing on the green 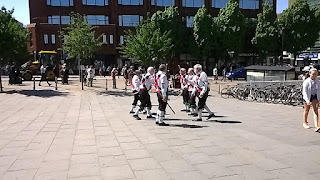 or rather the concrete outside Wimbledon station in the London suburbs. That's what I love about London - you never know what you might see next. But it seems many things have changed since I went away. Every time I come back to London, I feel more and more like a foreigner. For example,  I have nothing against bus drivers, except the ones that drive off just as you puff up to the stop.  But suddenly, now,  everyone getting off the bus is thanking the driver. Which is a nice development except that now, as well as lugging your shopping, dinging the bell, etc, you have to remember to shout, "Thank you driver!" That didn't tend to happen back in the day. But you have to do it in case the drivers keep a blacklist of ungrateful passengers,  smart enough to identify them as they puff up to the bus stop.
Another thing. Why is everyone suddenly saying "Oh Bless!" This is bad enough when I mention my dear old mother. I only have to say that she did something perfectly normal, like having a cup of tea,  to get an "Oh Bless her!" from all and sundry. Well I know people are trying to be kind. With the emphasis on the trying. But the other day I was on the phone to an office about some mundane bureaucratic thing. I mentioned to the receptionist that I had been trying to get hold of one of her colleagues without any response.   "Oh Bless!" she said.  Oh !@#$% more like. Enough of this fad, thank you!
Posted by Alenka at 11:57 AM