Spring and St Who?

Americans will tell you that tomorrow is St Patty's Day. Back where I come from, Patty is a girl's name, though perhaps they just can't pronounce "Paddy." Odd, because, when I try to say "water" in America, no one understands me. There was the famous incident of the flight attendant who struggled for a long time to decipher what I was saying and in the end asked hubby, "What did she say?"
"Wahdurr" said hubby.
We are in for corned beef and cabbage at our neighbourhood party tonight. Again, I had many Irish friends back home but never got served corned beef and cabbage. "It's an Irish-American thing", someone explained.
Meanwhile, spring has sprung in Golden Beach. Our white orchid tree is rampant. 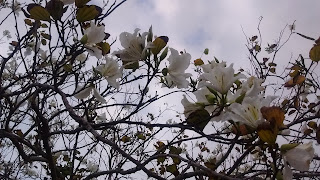 Boogie-woogie is in great form 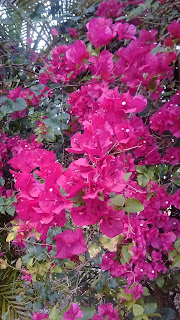 Even Amanda, the straggly alamanda, has made an effort 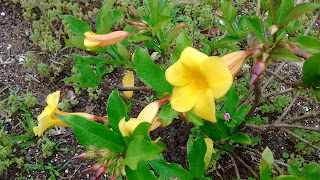 And Franky Panky is actually sprouting! 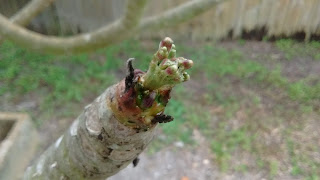 Alas, we're not likely to see the sublime frangipani flowers before we leave for Up North, though there will be some left in October.
As you can see, today is a little murky. I went for my usual early morning run on the beach, passed on the way by an elderly cyclist in Full Lycra who called out imperiously, "Stay close to home. It may start raining."
"Who do you think you are? My mother?" I muttered, "I'm perfectly aware of the state of the sky." Perhaps, I said to hubby afterwards, he was used to bossing his wife about. No, hubby corrected, "He is used to being bossed about by his wife and was taking it out on you."
I recovered my good mood on the beach 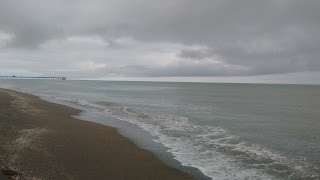 Though it was probably a good thing I didn't encounter the dog-owner who'd left incriminating footprints. 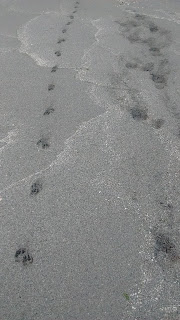 I could have tracked her (it's invariably a her) back home I suppose, but life's too short.  My friend the egret was there was usual. 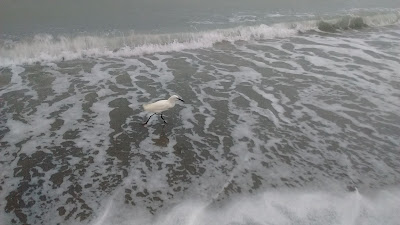 Though I just missed getting a photo of an osprey flying overhead, an enormous fish flapping in its talons.
Back on the road, a race had just finished. The temporary traffic sign said "runners" but most of them were walking. Well good for them for trying. 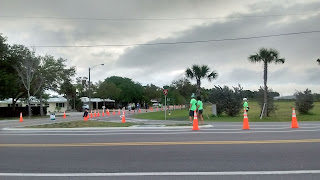 And another sign of the season - a baby donkey at the riding stables! 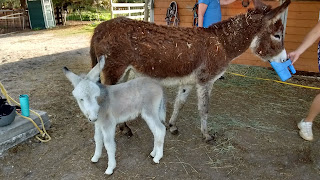 She's an adorable ball of white fluff and scampers around, kicking up her heels.  But she has not been named Patty.
Posted by Alenka at 9:37 AM