Just when I thought the blog's title would have to be altered to reflect changing times and a lack of turkey sightings,  I was walking up the lane in the early morning sunshine when I spied some movement... 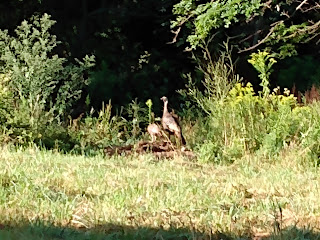 Quite definitely wild turkeys. Descendants, perhaps, of the lads on the sunlounger. The next day they were back again. 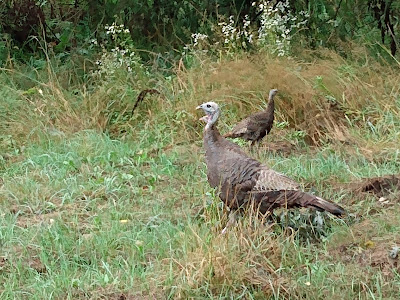 I'm not an expert but it looked like Mum and two teenagers. 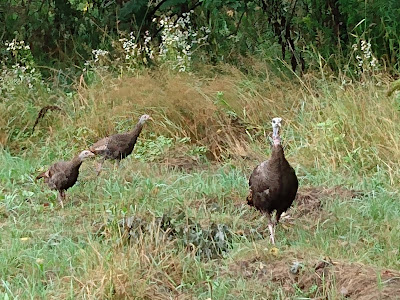 She seemed very unafraid, strutting around in broad daylight, not concerned about social distancing, letting me get quite close. Wild turkeys really are quite magnificent birds, sleeker and more graceful and dignified than their farmed relations. The myth is that Founding Father Benjamin Franklin wanted the turkey, not the bald eagle, to be the national symbol. This is apparently fake news. What Franklin actually said was  that the bald eagle was a "bird of bad moral character... he does not get his living honestly". The turkey, on the other hand, he considered "a much more respectable Bird and withal a true original Native of America ....He is besides, though a little vain & silly, a Bird of Courage." 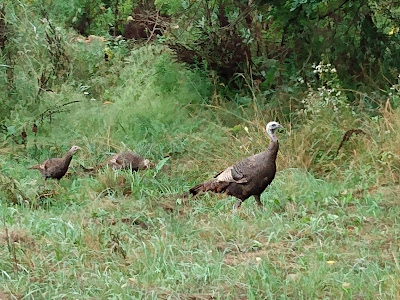 I wouldn't argue with that. They are shrewd foragers too. There was something on that heap of dirt this lot seemed to be enjoying. 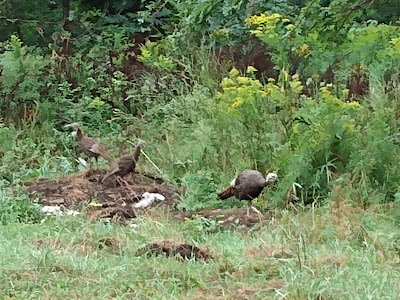 Then off they sauntered again, against a backdrop of autumn goldenrod. 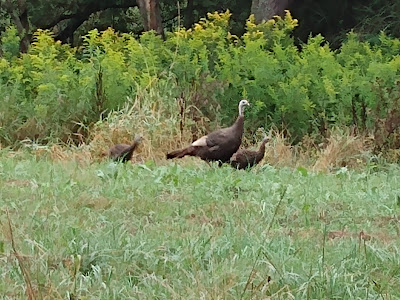 Alas for them,  turkey season starts on 17th October. They'd better start getting more wary. Time for turkey lockdown perhaps.
Posted by Alenka at 11:10 AM