The beauty of the annual meandering road trip sister-in-law and I take down to Florida is that you never know what you're going to come across. Like getting passed by a string of Corvettes, all different colours. 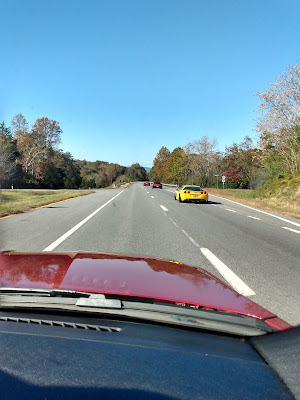 Or accidentally stumbling upon  Shade Tree Rare Books  Chatham, Virginia. It was just a small town, with a small, friendly shop selling used and antiquarian books. They had an extraordinarily eclectic selection (what was Nigel Nicolson's autobiography doing in Chatham Virginia?) and some lovely tomes about  local history  but nothing prepared us for what lay beyond the door at the back. "You must see our reading room". 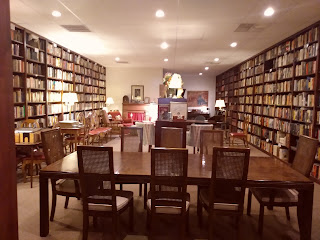 And what a reading room! I could spend several happy hours just browsing. The proprietor, Henry Hurt, is himself an author as well as a passionate booklover. Do check it out if you're ever around that way.
Rather less intellectual are some of the restaurants we've come across. This barbecue place offered a dish that was not for the faint-hearted (in every sense.) 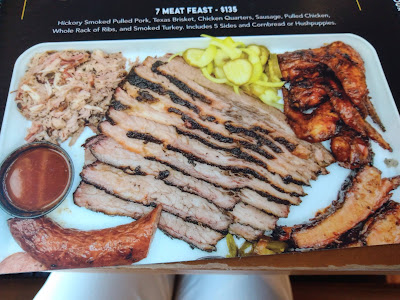 No I did not chomp on the 7 Meat Feast for 135 dollars, just took a pic of the menu. I contented myself with some very lean and tasty brisket.  And there was a lot of it. Thank goodness for the American custom of doggie bags. We had enough for sandwiches for the rest of the trip.
Now here's a place that's gone down in legend. Remember Jimmy Carter? The venerable former President is still living in the tiny town of Plains, Georgia. 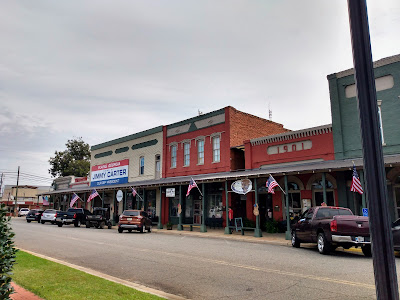 And long may he do so because the town has obviously thrived on his name. There's a row of Jimmy Carter themed gifts shops, a restaurant, a Rosalynn Carter garden, a museum. And of course peanut motifs everywhere. 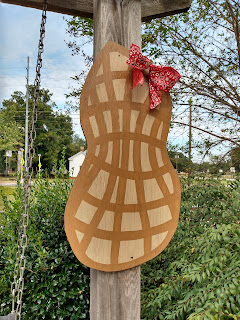 When he campaigned for President in 1976, Carter was described in Britain as a peanut farmer, though he was other things besides, including a former Senator and Governor of Georgia. When we were in Plains he'd recently celebrated his 98th birthday and the locals were allowed to stream past his family home to pay their respects.
Then it was on to Florida and Seaside an early architect-designed model town with its pretty-pretty white fences and charming buildings and a small, snooty eatery that wouldn't serve us coffee despite calling itself a cafe. Well I suppose words mean different things here. 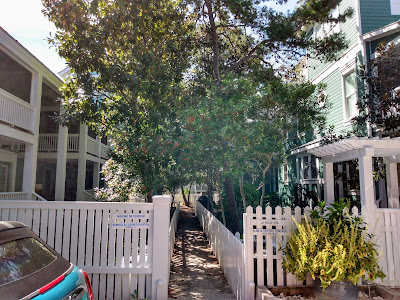 Seaside is where The Truman Show was filmed. The one about the chap supposedly living in an idyllic small town, with a perfect wife,  who realises he's spent his whole life on a film set, being ogled at. He finally escaped - as did we.
Apalachicola, however is still a genuine fishing village. 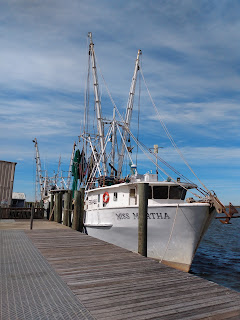 Albeit a touristy one. 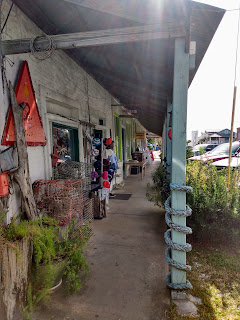 The only trouble with it was that we couldn't find anything to eat. We'd forgotten that we had to re-cross the time line and it was an hour later than we thought - and too late for lunch.
By the time we got to our overnight digs in Perry we were pretty hungry. We did not patronise this place but just had to take a photo. 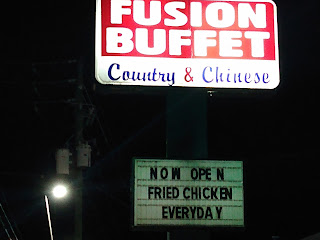 OIA. Only in America.
And just to point out that Florida isn't all ten lane highways. 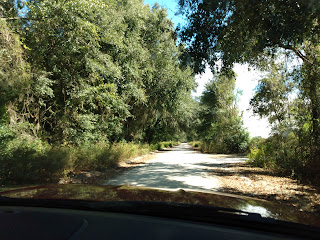 Our friendly robot, Carmela, took it on herself to send us down a dirt road. It was fun - for a while. Such are the pleasures of staying off the highways.
Posted by Alenka at 7:18 PM