It's been a while, I know - a combination of utter despondency at Harry Kane's penalty miss and the usual hassle running up to Christmas.

I had an interesting time today at the monthly meeting of a group called the Sons of the American Revolution, of which hubby is a proud member. They all have to be descended from someone who fought for the American side in the War of Independence and are keen on promoting better knowledge of history and the US Constitution. They are impressively patriotic in a good way and refreshingly free of party politics. I was quite touched by how they welcomed me - even though I'm British. I assured them that, in 1776, none of my ancestors were anywhere near Britain and had no role in persecuting the gallant American colonists. Maybe one of the central European ones even went to fight for the American cause, in which case I could join the Daughters, who have their own organisation  - but I expect I'll never know.

The SAR often have interesting talks about little snippets of Revolutionary War history. Today it was about a chap called Pedro Francisco, known as the Giant of the Revolution, who wielded a six foot sword and was wounded six times and allegedly lifted an 1100 pound cannon, single handed. Hubby though that might be embroidering the truth just a little.

And last month visiting speakers dressed up as Abigail Adams (wife of the second President), her son John Quincy Adams and Thomas Jefferson 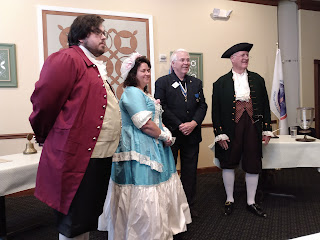 and read from some of their letters to each other. Letters full of learned quotes and beautiful - and courteous -  language, as far removed from Tweets and other examples of what passes for modern communication as you could imagine.  That's the forward march of civilisation for you. Interesting that, after Independence, both the Adamses and Jefferson spent time in Paris and London. It must have been one heck of a difficult journey but people just got on with it. And here we are in 2022, complaining about delayed flights.

And while I was chatting with people around the table I was struck by how the conversation invariably turned,  as it often does here in America, to people's ancestry and - yes - where they really came from. And guess what, no one was offended. A different culture here, I suppose. Most people originate from somewhere else and can't wait to be asked about it.