I once took part in an archaeological dig under an old office building in the City of London, poking around in what they  reckoned was an ancient version of a rubbish dump. We were supposed to be looking for Roman remains but the most exciting thing we found on my watch was a Victorian coal scuttle.  Still, there was the thrill of the chase,  not to mention the challenge of travelling home on the tube covered in mud.
So when I heard there was going to be an Archaeological Open Day in our village I thought I’d check it out.  When you think archaeological digs, a farm in rural western New York doesn’t automatically spring to mind.  So far as I know, the  Romans never got to Cattaraugus County, no matter how straight some of the country roads might be. But America is full of surprises. 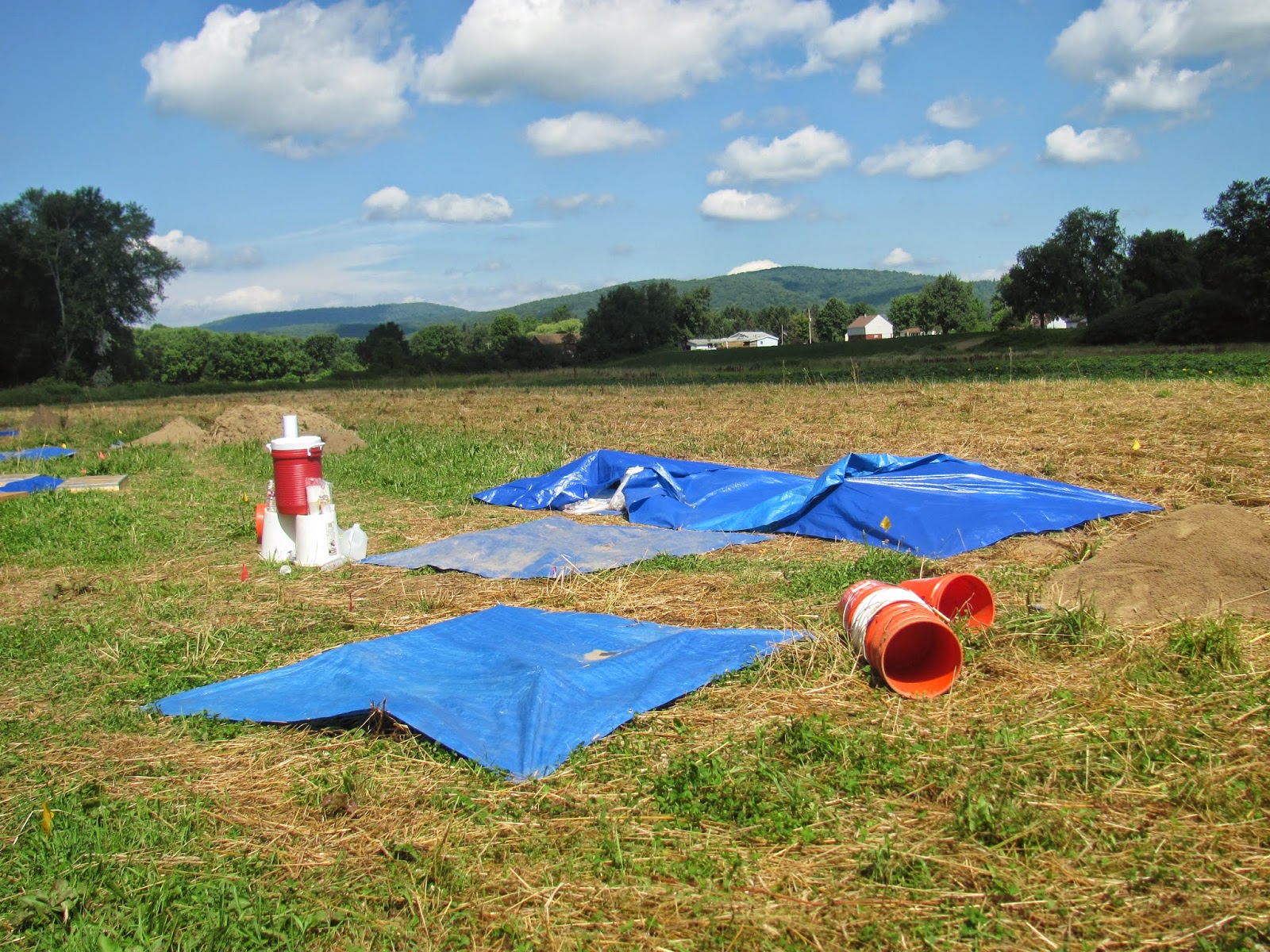 I got to the site to be greeted by  Cynthia and Sonja, two ladies from Virginia Beach down south, who were volunteering at the dig. In fact they spent most of their weekends delightedly digging and scraping, wherever their services were needed, 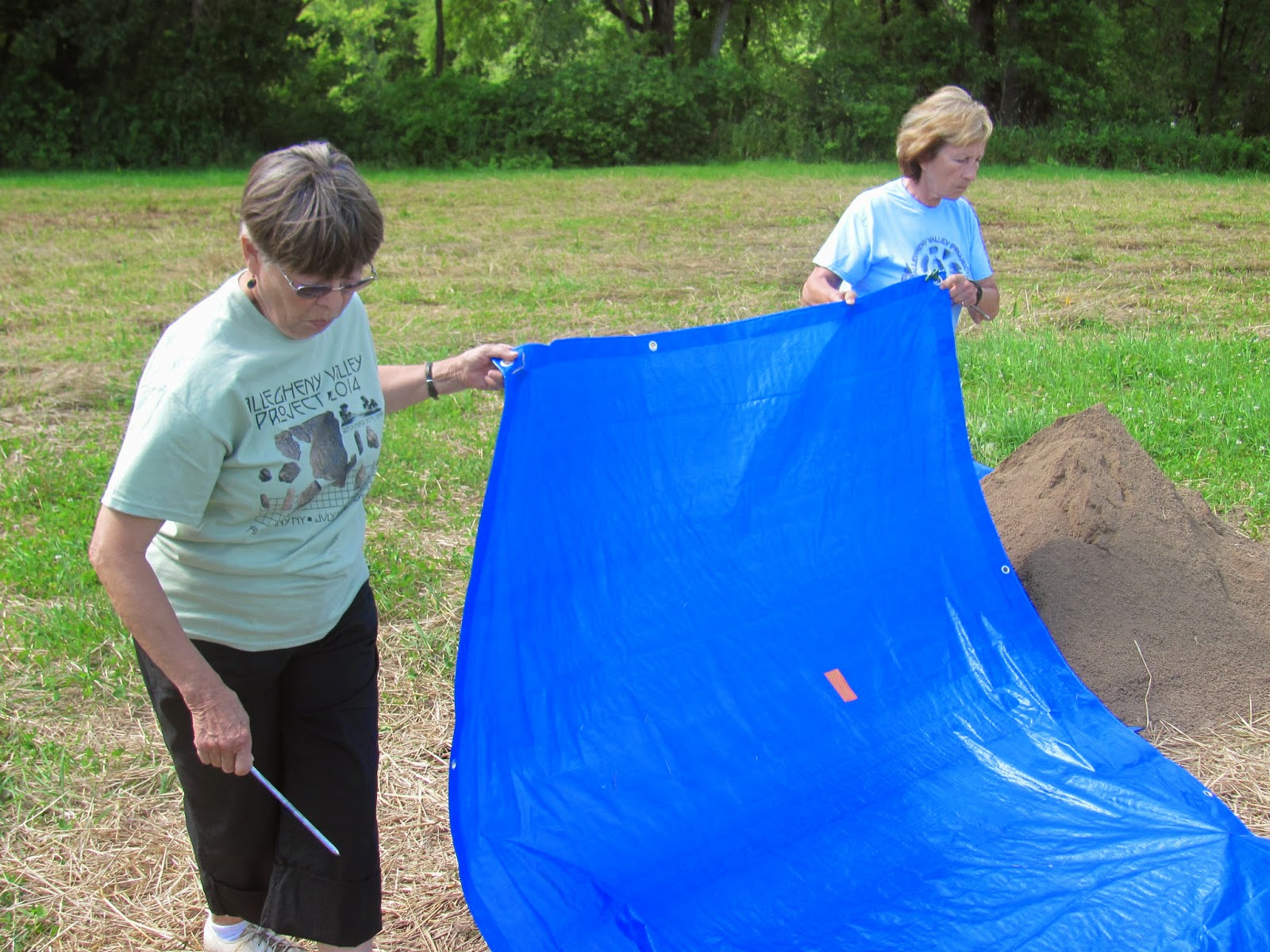 “You’ve got to be willing to get dirty and get your hands blistered!” Yes I could remember that.
“And don’t tread on anything blue”, they added, “There’ll be a hole under it”. 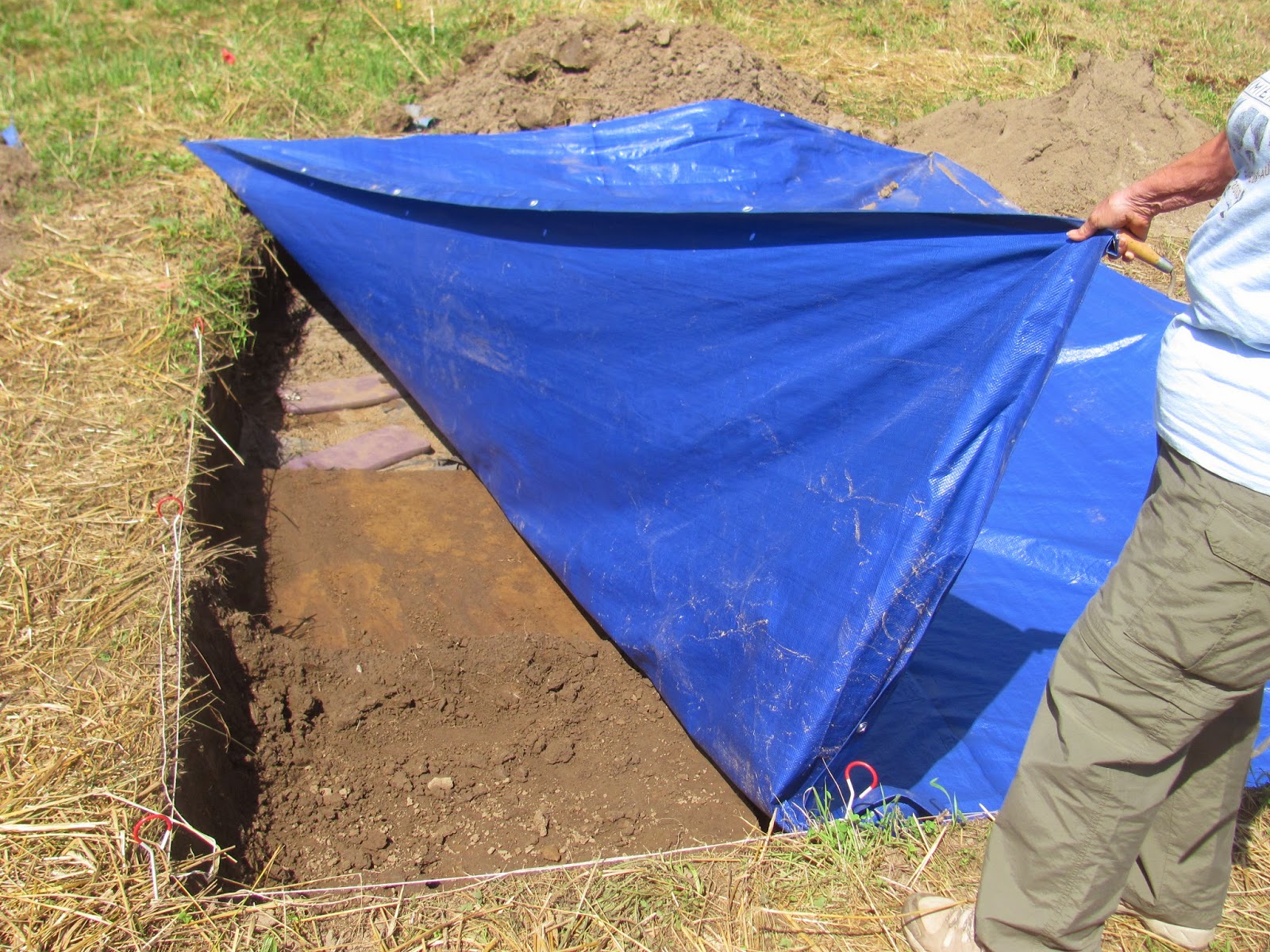 We walked out into a field of flowering pumpkin plants and there beyond them, sure enough,   several areas covered in blue plastic. I stepped around them nervously.

My guides explained that our local site, one of several being  excavated along the Allegheny River, dated from “prehistoric times”.
I started thinking dinosaurs and woolly mammoths but then realised, of course, that “prehistoric” in American terms is something much more recent, in this case about 800 years ago.   Any time before the European settlers came and started documenting things is prehistoric.
Near where we live is a Seneca Indian reservation,  a sad sort of place these days, marked by   run-down houses, garages selling cheap petrol and cigarettes and a giant, ugly casino. There’s little there for the people to do except cash in on the tax breaks they get as Native Americans to run things like that.
But 800 years ago, the Senecas’ ancestors had all the area to themselves, living in the forests,  hunting deer and growing corn and squash. It was known as the “Woodland” period.
Cynthia uncovered one of the blue plastic covers and we looked down into a meticulously excavated square hole, bordered with string. 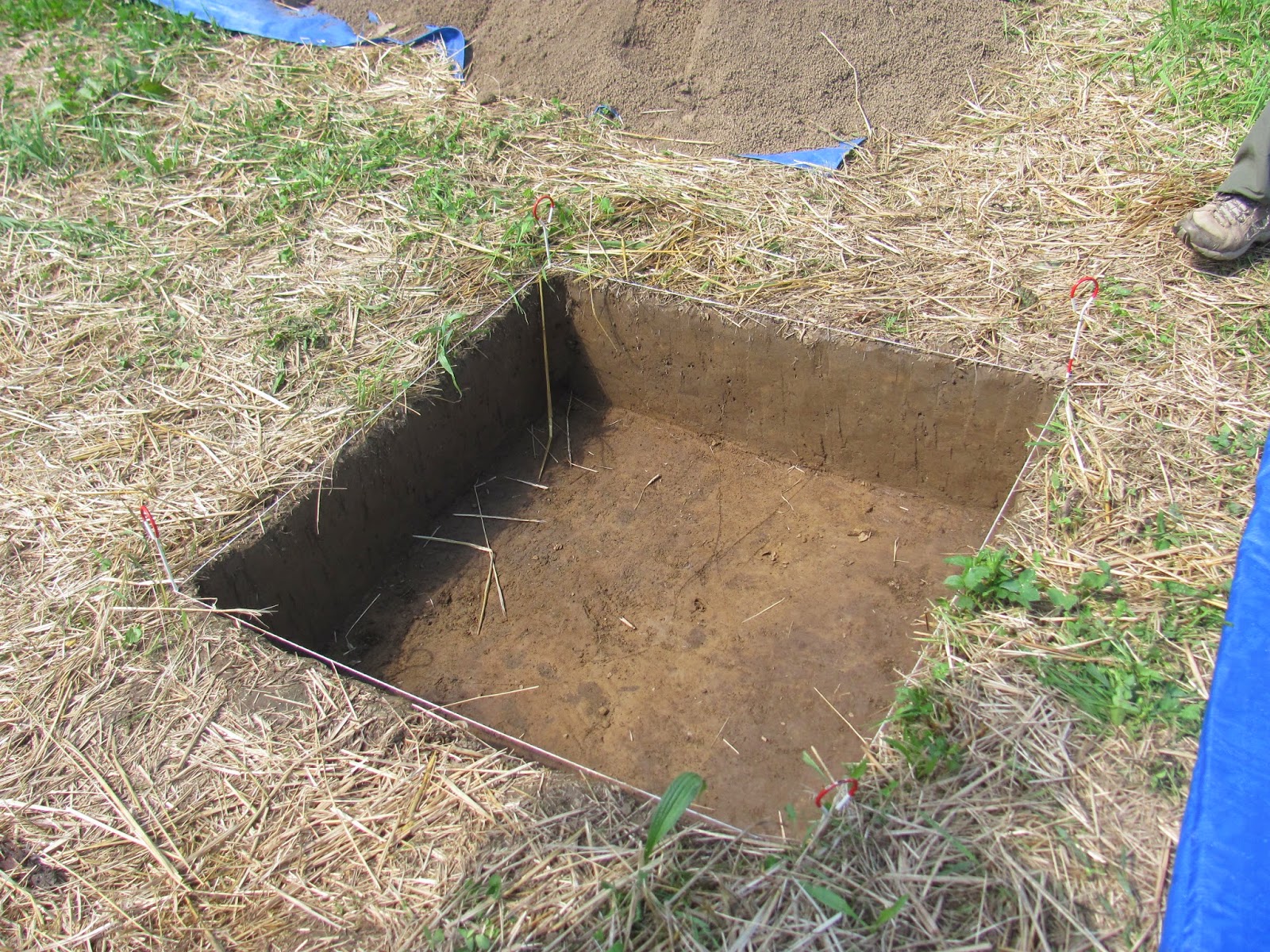 “Look”, she said, “See where the earth looks lighter? That means it’s below the plough scars”. In other words untouched by modern agriculture.

She pointed  to what she called “features” – marks that could possibly reveal, for example, where a pole had stood, a prop for one of the longhouses that the people of those days would have lived in. Unlike the plains Indians further west, they didn’t have tepees but more permanent dwellings shared by several families. And this square we were looking at might well have included – yes, a rubbish dump, where all the best artefacts are found. Like archeologists the world over, Cynthia and Sonja and their boss, Steve were very excited about rubbish dumps. 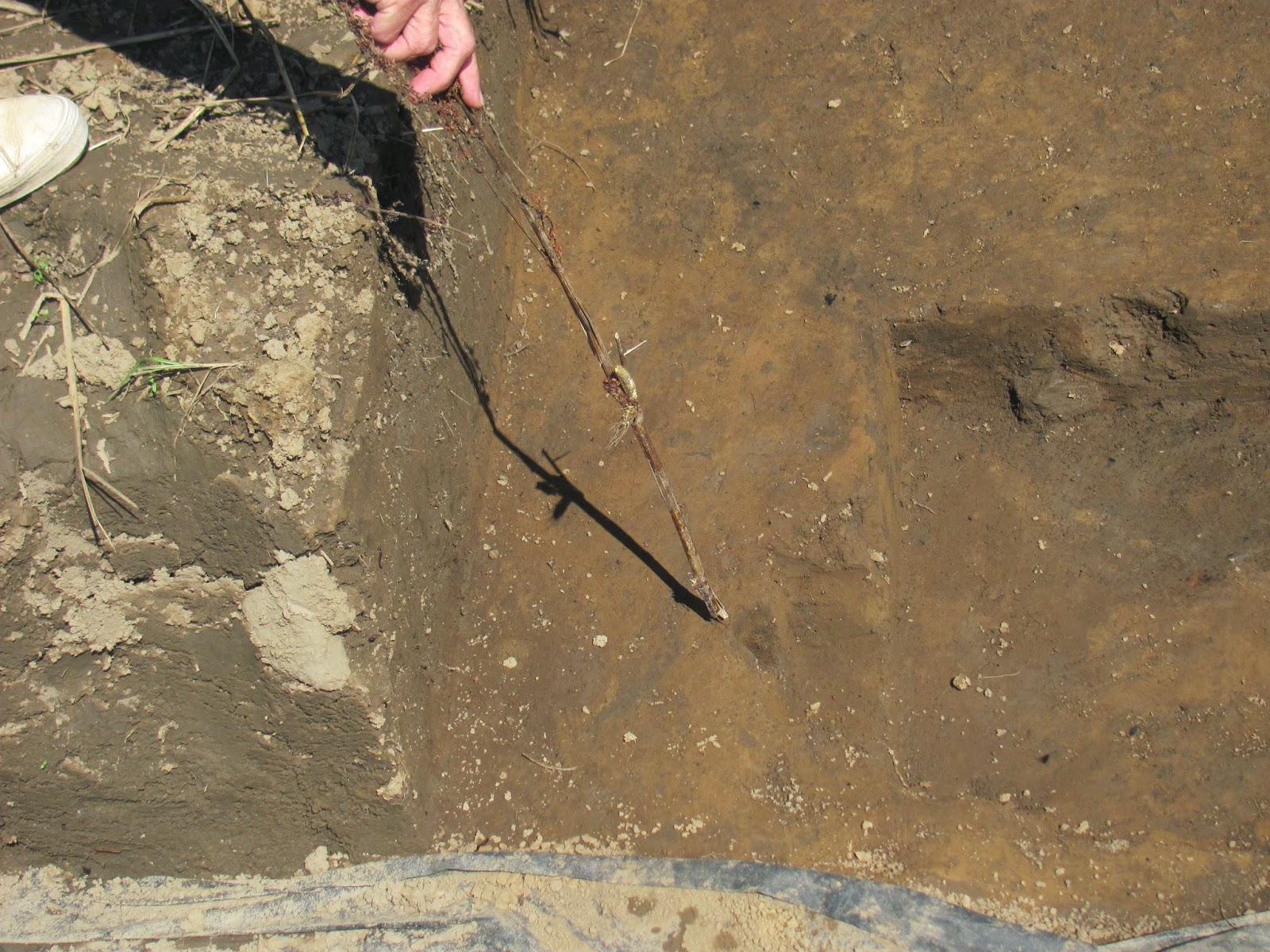 Excavation is a slow and painstaking process. They’d been working on this site for a few months already.   And displayed on tables were objects  they’d already found. The “projectile points” – arrowheads to you and me -  carved out of flint had come from a different site across the river. 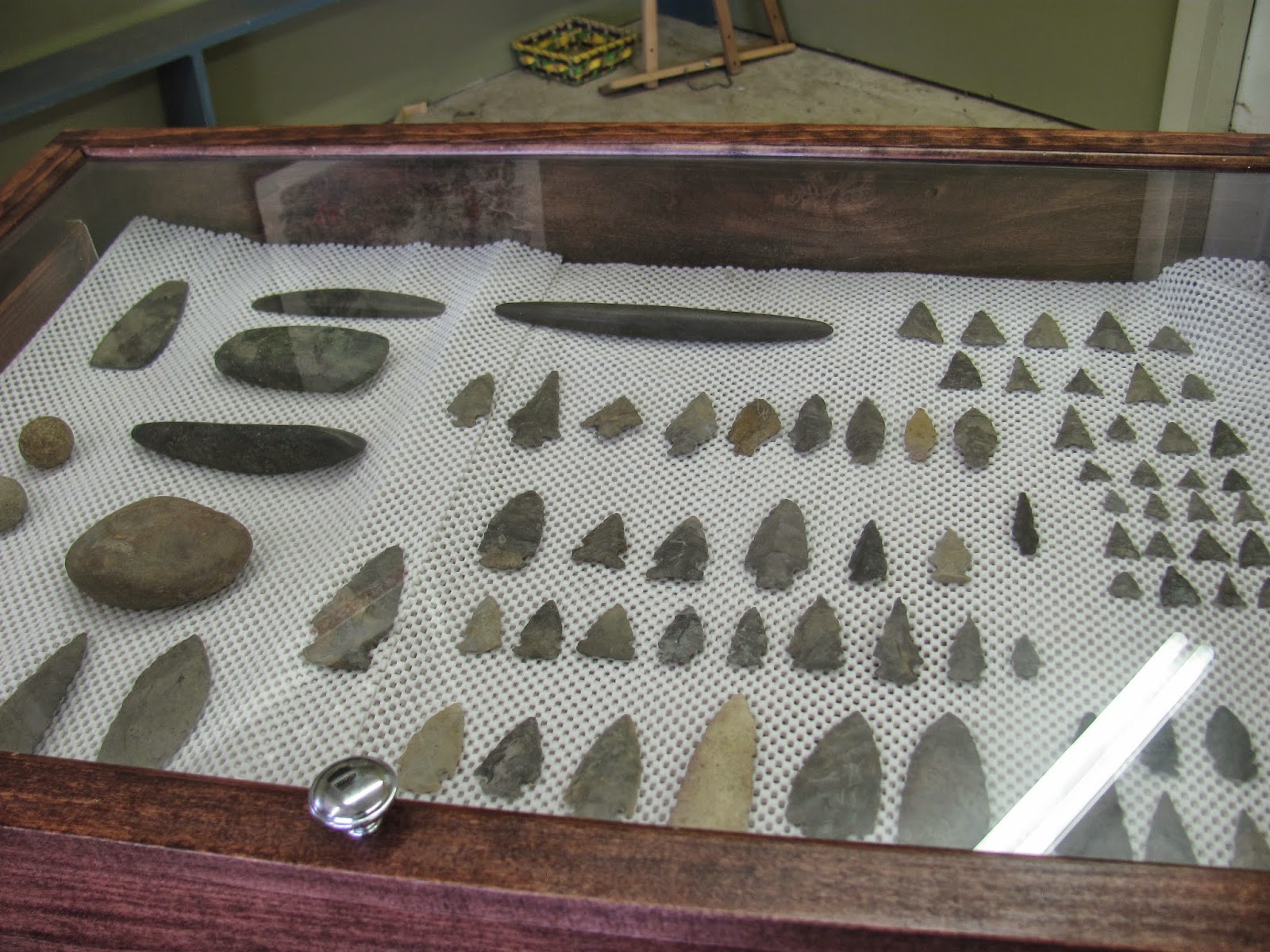 But our site had already produced pottery shards, 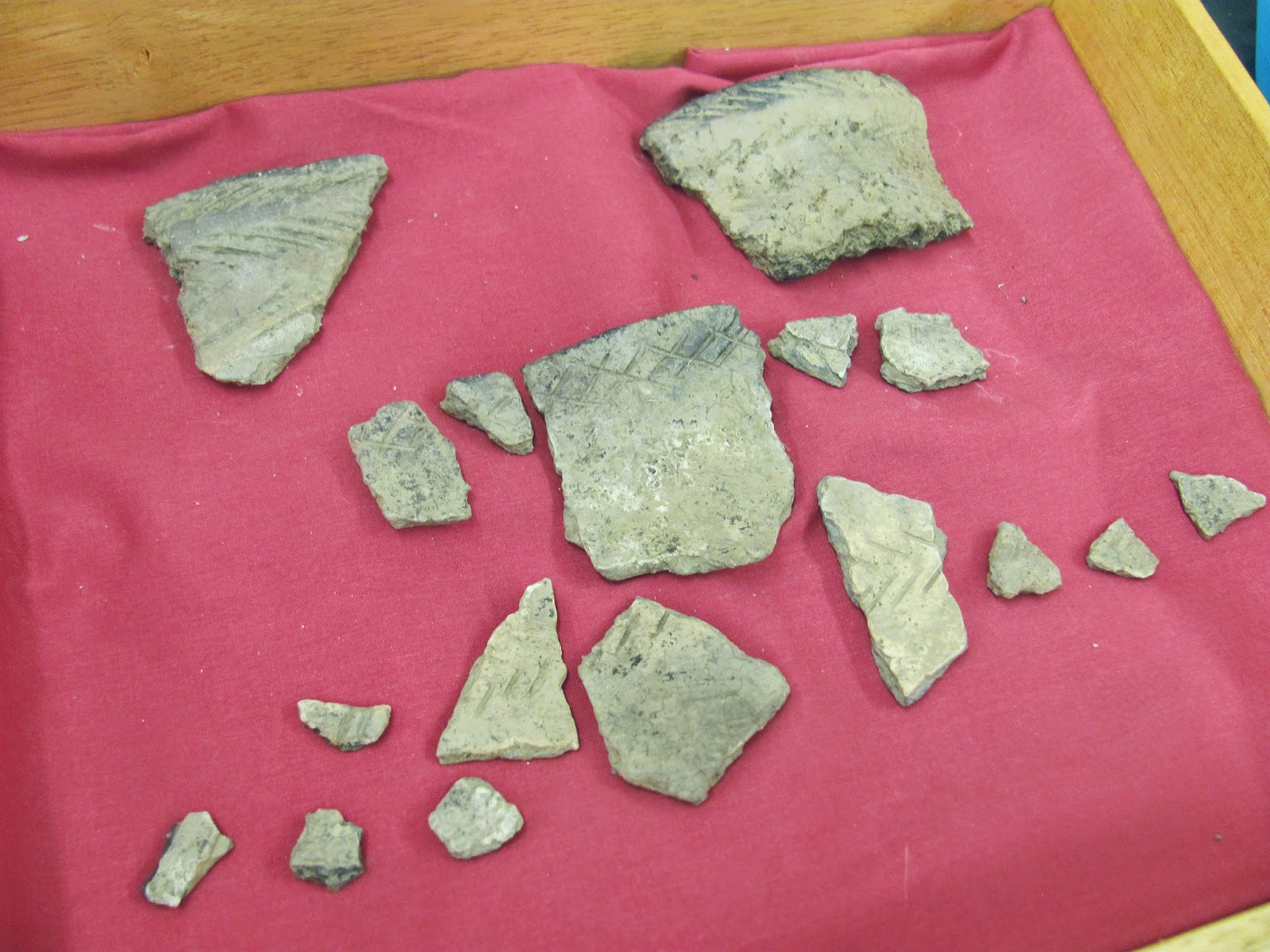 many in a design experts call “Ontario oblique”, the reddish-coloured markings faint but still delicately pretty. 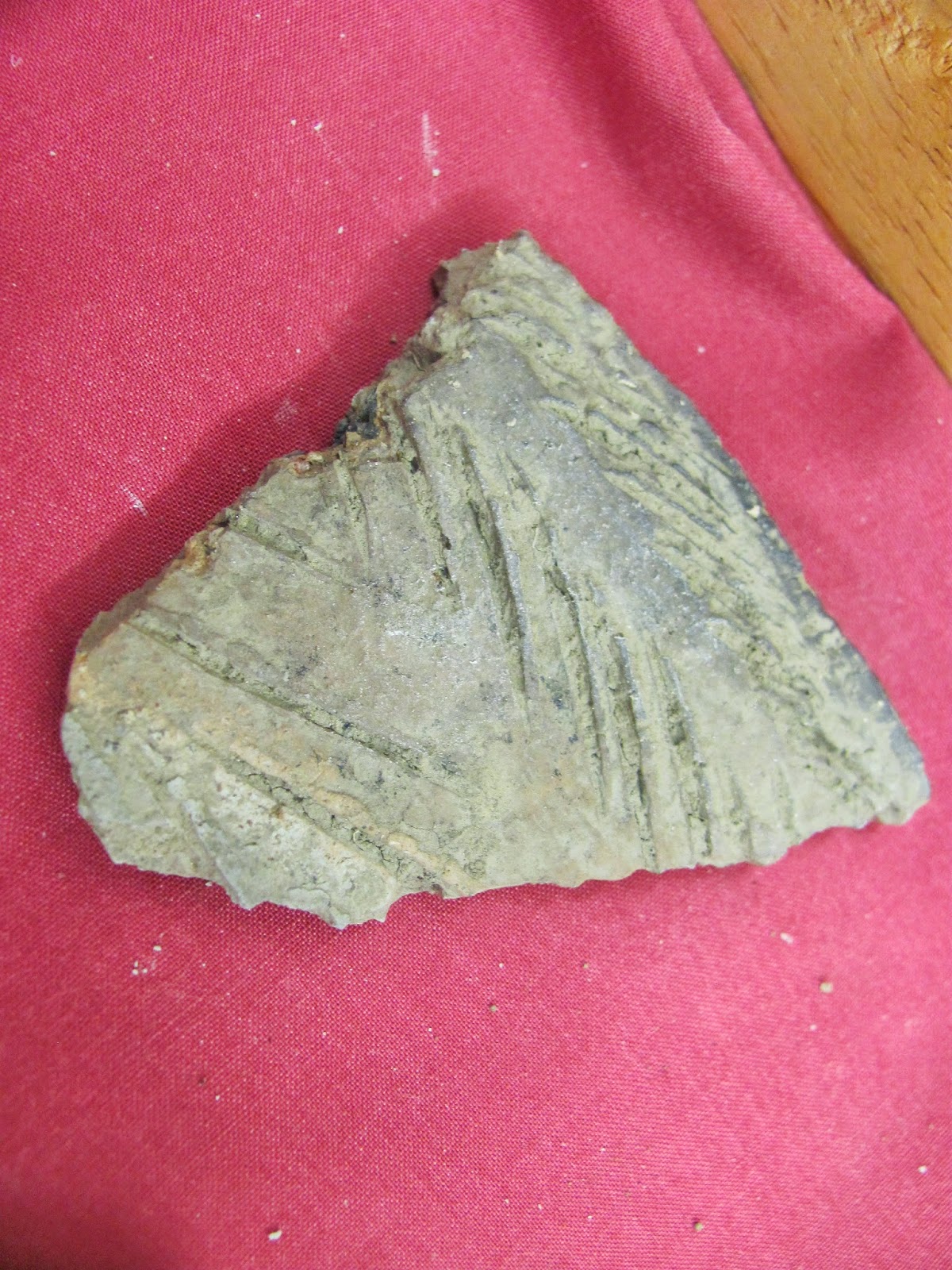 And there was a pipe - but that was newer, probably dropped by some 19th century farmer. 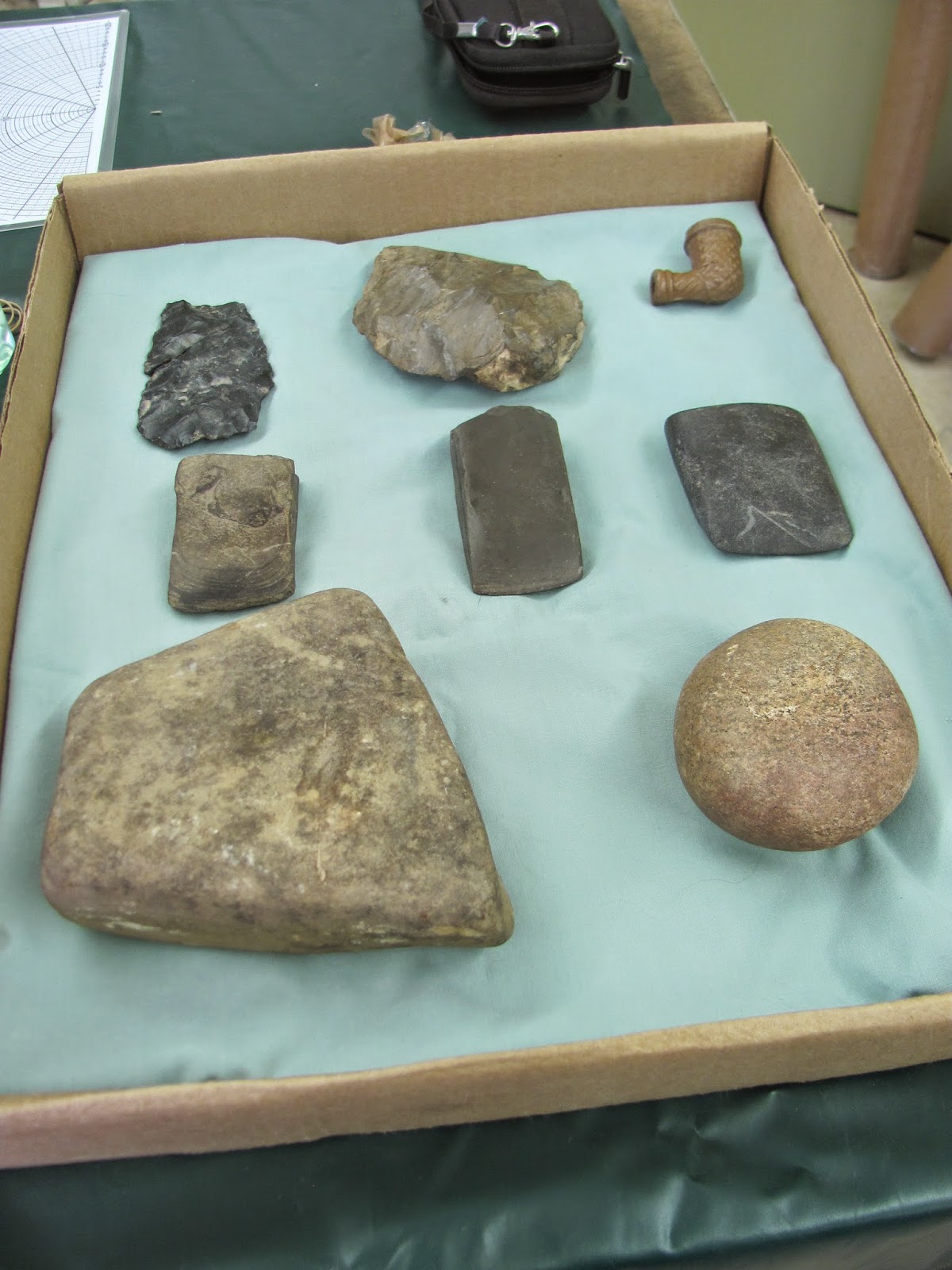 Nearby, children were sitting on the ground learning about “flintnapping” – or making weapons out of flint. 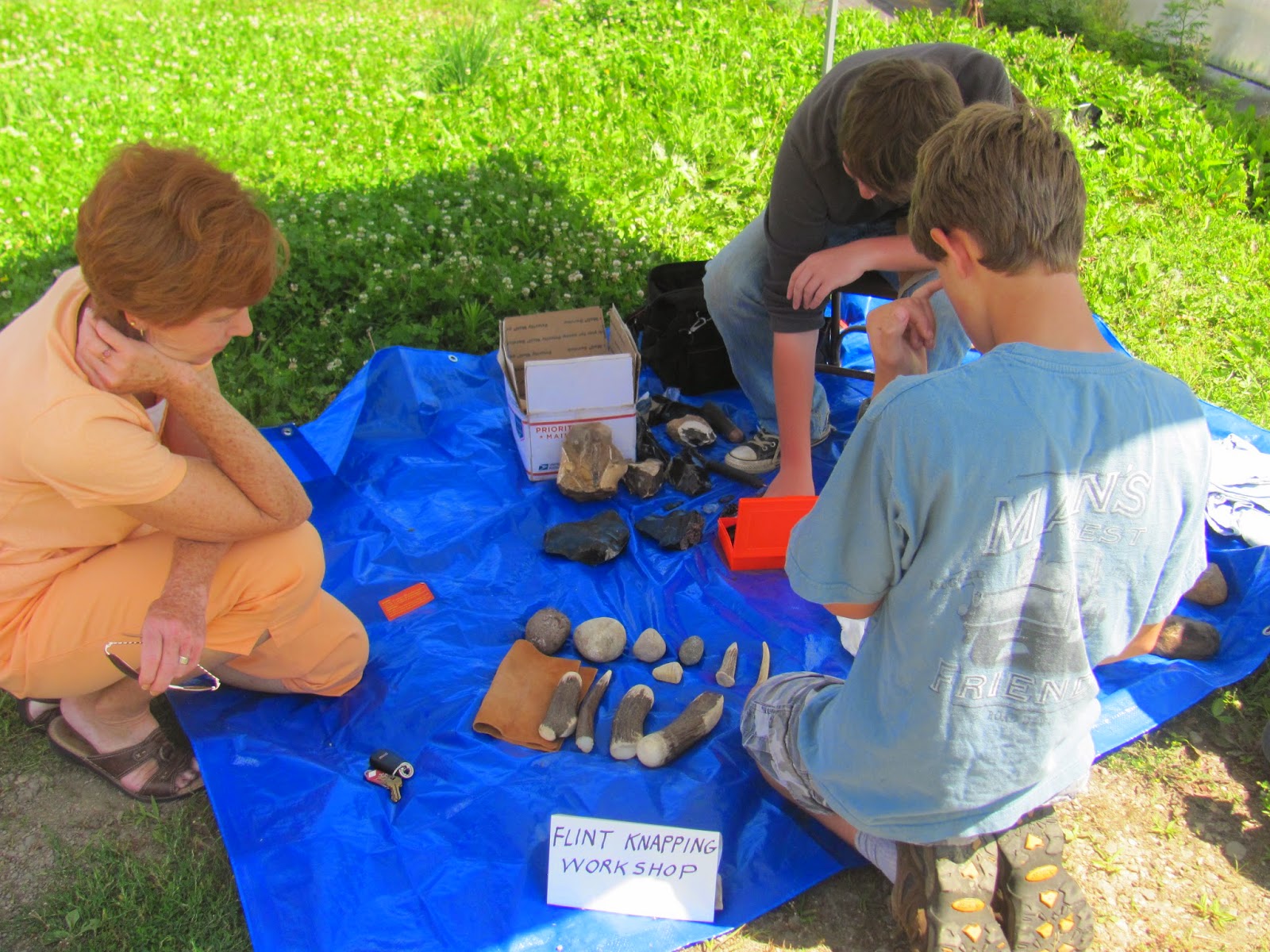 And of course they were selling the inevitable T-shirts.
I found it all a moving experience, a reminder that, way before Christopher Columbus,  way before Walmart and McDonalds and the giant casino, there were families living here,  eating, sleeping,  quarrelling with their neighbours, throwing out their rubbish and probably grumbling  about the weather.  Just like us, really.
Posted by Alenka at 10:33 AM