The blog has been on a quick visit back to Blighty, where the weather was unaccountably springlike. After I landed in Newark, my friends at United Airlines kept me in suspense by announcing that my flight to Buffalo would depart two hours and fifteen minutes late, due to late arrival of incoming aircraft (sic). I studied the normally trusty "Where is this flight coming from?" link on my United app, which informed me that it was coming from Buffalo, another two hours later.  Something not quite right there.
Since I already had to wait four hours, I sighed and repaired to a workstation with my laptop. A gal came and perched next to me wielding her phone with loud noise blaring out. I asked her if she might affix her headphones, as I was trying to work. "Oh", she said in puzzlement, "I didn't realise you were working."
"No actually, I'm sunbathing", I said. Incidentally, I could have tried to get on an earlier flight that was just boarding as I arrived but they assured me that there was no way, absolutely no way, that my bags would get on it too.
Then came a nice pre-Christmas surprise as an incomprehensible announcement came over the tannoy and I observed the less hard-of-hearing of my fellow passengers jumping up and walking very fast to a different gate. There was the Buffalo flight, suddenly on time again. And off we went westward, with a nice sunset as a bonus. 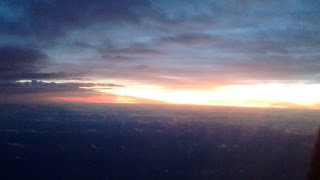 When we landed at Buffalo, I asked the stewardess/flight attendant what had brought about this pleasant turn of events. It being a small plane, the pilot stuck his head out of the cockpit and said, "Oh we just got another plane." Would that it were always so simple. Buffalo flights usually get the rough end of the stick. "Thank you!" I exclaimed in pathetic astonishment.
There followed two more surprises, one being my bags, waiting patiently outside the United office. They had been fast tracked onto the earlier flight, only I hadn't. The second surprise was our front garden. 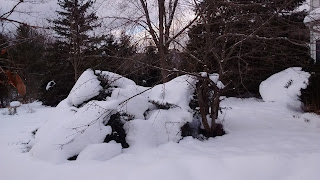 Yes, we will have a white Christmas. 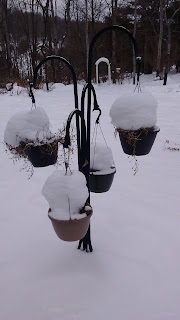 I recollected my snow-shovelling skills only to find the trusty shovel had a loose handle. I'll just get another one.
Posted by Alenka at 10:25 AM