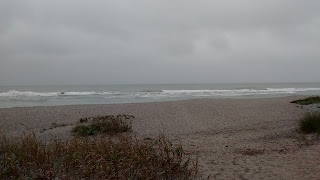 It just shows how all things are relative.  We are cold here. We are shivering. The heating's come on but it's not enough - I think it still thinks it's air-conditioning. And of course the ducts are in the ceiling, not much use for heat. Heat rises. Duh.  The robot on the Marine Weather Radio is telling people, in nanny state fashion, to put on warm clothes and bring pets indoors. I noticed that a neighbour had thrown sheets over his garden shrubs, something I neglected to do.  Thankfully we missed a frost last night by a few degrees. (The previous owners of our house said it snowed here once). Florida and cold doesn't go together. Everything is geared to shorts and sunshine.
"At least it's a chance to wear some of my sweaters and scarves", a friend remarked. Others, who, on retiring to Florida full time, had gleefully tossed out their winter woollies as one puts away childish things, are starting to regret it.
There was a sweet story though, of a dad in Tampa who studied the weather, found out there were going to be a few snowflakes in northern Florida and packed up his kids in the car to drive up there and give them a chance to play in the snow for the first time in their lives.
But why are we complaining?  When Up North is suffering its worst winter since time immemorial. Erie, Pennsylvania, just down the motorway from our western New York home, had over five feet of snow in a day.
It's the wind that's really bad", said my Cattaraugus County neighbour on the phone this morning, "We are just hunkering down in the house."
For once I share the view of a certain incumbent of the White House.  Bring on that ol' Global Warming. Bring it on!
Posted by Alenka at 6:07 PM