Forget politics, the hot topic in these parts has fur (if it's lucky), four legs and a pointy nose. For the benefit of my British friends, coyotes are like a cross between a fox and a wolf. They are pronounced "k-eye-oh-tee", though I usually can't bring myself to say such a mouthful. In my head, I always say "coyotte".  The wily characters, like urban foxes in Britain, enjoy foraging from dustbins. They are also unfortunately partial to cats and small dogs. Since countless people around here possess miniature yappy dogs as substitute grandchildren (aka grandpuppies - very PD James), there have reportedly been incidents. Also reportedly there are streets on the island where dawn dog-walkers always carry big sticks. Sadly, some of the coyotes are mangy. Those who have lived here a long time are aware of the risk. Newcomers often are not. Hence the City Hall held a Coyote Forum, to educate people about what to do.  Star of the show was this handsome stuffed specimen. 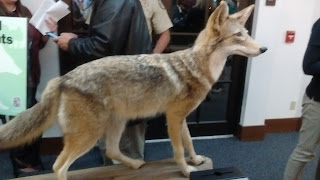 The gist of it was chiefly common sense - keep pets on a lead, don't put out food for the coyotes and so on. There was also a film on "hazing" coyotes, which basically means seeing them off the premises by shouting and making yourself look big. One thing you shouldn't do is run away, as they will enjoy chasing you. Coyotes, all the speakers emphasised, are here to stay. They only moved into Florida from the Wild West some 50 years ago and now they're in every county. 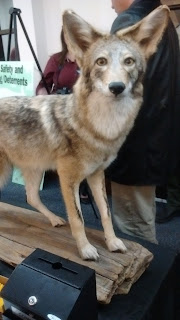 It was interesting that the speakers didn't invite questions afterwards - I think they were afraid that there would be a slanging match. (I have noticed that the hysteria in America over politics has filtered down to every aspect of life. People panic when they find someone challenging or disagreeing with them and can get aggressive, at least verbally). So different speakers manned desks at the back of the room and took questions in what was presumably a more controlled atmosphere. I observed one lady haranguing one of the speakers with a "So what are you going to do about it?" tone. The speaker suggested automatic sprinklers, pepper sprays and so on. No one dared mentioned guns - that would be illegal so near houses anyway. Personally I feel some sympathy for the coyotes, who are only doing what coyotes do, though I wish they'd get better at chasing the rabbits that are taking over my garden. But then I don't have a small pet.
Posted by Alenka at 4:29 PM