You learn something new every day. A number of my western New York neighbours are avid deer hunters.  Deer season is a couple of months away yet and the deer know it. This morning I saw a couple of them sauntering across the lane heading towards someone's vegetable garden, smacking their lips. Then they saw me and bounced off into the woods, tails waving. They'll be back.
Meanwhile the hunters are on the look out for some fresh trick to get an advantage over the opposition.  Like this one spotted at a friend's house. 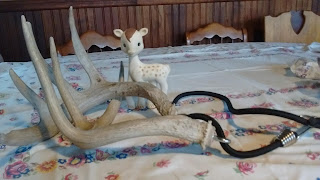 It's a sort of belt with a set of antlers at each end. The idea is to put the belt around your waist and clack the antlers together. It sounds like two stags fighting. "I thought that would make them run away", I said. "Oh no", said my friend, "It attracts them". A rival stag will come trotting up to see who's causing trouble on his patch. And then, well you can guess the rest. It sounds a bit like wishful thinking to me but I'm not a hunter. Bambi doesn't seem too perturbed.
Speaking of deer, the other evening we drove past the local University campus, St Bonaventure. There, in the pleasant park in front were hordes of deer. Some grazing, some snoozing on the grass. It was a deer cocktail party. Or deer freshers' week perhaps.
The next morning I walked up the lane and saw no deer at all. Then I remembered. They were all having a lie-in, or still rolling home, slightly the worse for wear.
Posted by Alenka at 5:33 PM