About That Mountain Laurel...

(See below). Wondering where I saw it? It was an unexpected place. Don't think the rugged wooded hills of Pennsylvania. Think green lawns, celebs and strawberries and "Quiet Please!" Yes, I saw it in Wimbledon.
Of course Wimbledon is only strawberries, celebs and "Quiet Please" for two weeks in the year. The rest of the time it's a leafy London suburb backing onto a magnificent area of open land in one corner of which is Cannizaro Park. I mentioned its fabled rhododendrons on a previous post but  that time I didn't notice the mountain laurel. 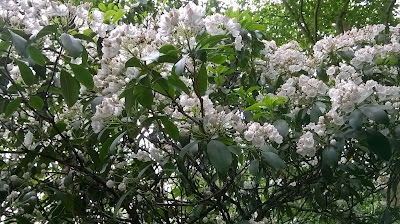 And it was doing a lot better than my Cattaraugus County versions which, thanks to the local deer population, haven't flowered for several years and a are barely a foot tall. 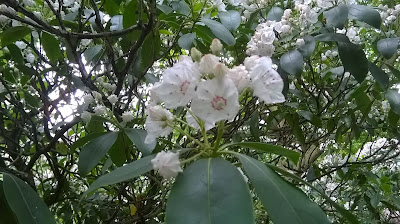 The rhododendrons were past their best and it was an overcast day but this one still looked pretty good. 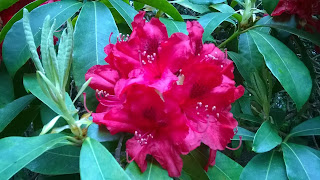 Out on the Common there was a blast from the past. A genuine ice cream van. I don't know if it played a tune but there it was. I'm surprised they still allow them - you would have thought elf and safety would have done for them a long time ago. 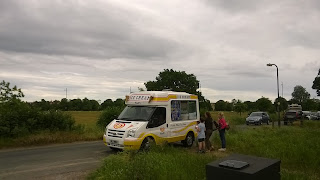 (Though apparently some British ice cream vans are notorious for gang warfare. Well the Glasgow ones at any rate.  No one told me that when I was six years old and racing after the music with my hot little hand full of sixpences.) Meanwhile the Common and the pond - this being a couple of weeks before the tennis started - presented a peaceful, bucolic scene, the grey clouds adding to the perfect picture of a suburban British summer. 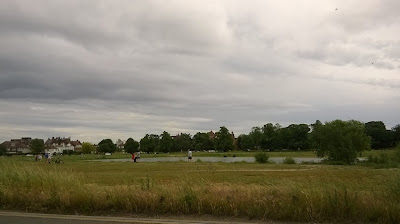 It really does look like a village green. You wouldn't think you were so close to London.
Now we're back in Cattaraugus County, I note my Wimbledon neighbours are complaining about all the people cashing in on the tennis, offering their front gardens for parking. One woman on the neighbourhood website has at least been honest "Yes, we charge for it and no, not a penny goes to charity. It's to pay for our holidays."  I might mention that any house near the tennis courts with enough front garden for parking spaces is going to be worth at least a few million. Pounds.
Meanwhile the American TV commentators here have been remarking how exciting Wimbledon Village has got over the past few years. "There are even some good restaurants." Cheek. Wimbledon beats  Flushing Meadows hollow and always did.
Posted by Alenka at 10:34 AM