Back At Last ...and Oh Deer

It's always an adventure coming back to our western New York home after a few weeks away. One time I encountered a large, fat woodchuck waddling across the porch. He had been used to having things nice and quiet. He looked at me, froze briefly, did a double take and waddled off again at double speed. This time we'd been expecting a jungle - it's never a good idea to be away in June, when everything puts on a manic growth spurt. 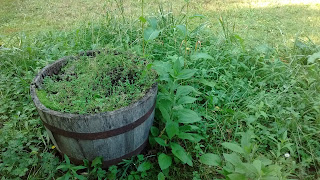 What we didn't expect was that it was just as muddy and wet as it had been when we left a month ago. And the jungle was twice as big as it had ever been in the past. I shouldn't have put all that Miracle-Gro on the flower beds; the weeds must have thought it was Christmas Day.
And while the weeds flourished, morphed and mutated, the real flowers seemed hardly to have grown at all. As I walked despondently around the garden, assessing the extent of the debacle, I began to see why. Everything had been neatly nipped off at the top. Yes, the deer had been helping themselves. They'd omitted to disguise their footprints in the mud. What I can never understand is why deer don't eat weeds. It's part of the perversity of nature. And with thunderstorms forecast every day, the air muggy and the mosquitoes whooping it up, gardening is not a happy prospect.
But tomorrow is the Fourth of July, a day of rest for my American friends. Hubby has hoisted his beloved Betsy Ross flag - the one with the thirteen stars for the thirteen original states, the first one made for George Washington et al by a lady called Betsy Ross.

He's furious that a few people with nothing better to do have been in the news objecting to the flag, claiming it's racist because it dates from slave-owning times and because some right-wing nutters espoused it. And the usual suspects have jumped on the bandwagon. (Well a few nasties liked to fly the Union Jack too. That doesn't mean we should get rid of it).
"My ancestor fought in the Revolutionary War and the Betsy Ross flag was HIS flag and no one's going to tell me not to fly it!" hubby pronounced. And I suspect he's not alone. The Wall Street Journal  lamented today over "another sign of our current political insanity."  Yep.
Posted by Alenka at 8:23 PM