Our feathered friends in Florida seem to have an inflated sense of their own importance. Yesterday morning I looked up at the - well, not sure you can call it a spire - of Epiphany Cathedral 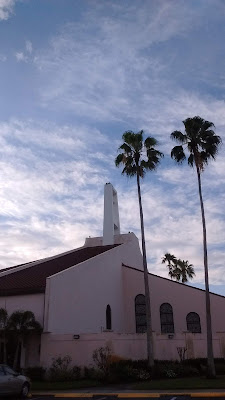 And noticed it was under occupation. 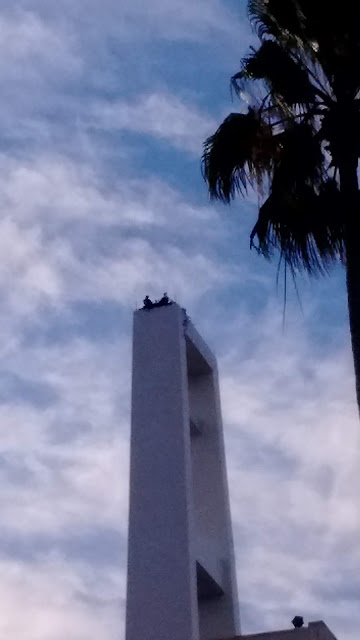 I know you can't see them too well from my phone camera but I can assure you that the penthouse suite has been taken. Mr and Mrs Osprey were looking snootily down at the parishioners trying to avoid bumping into each other getting out of the car park - as happens in church car parks the world over. I don't know if the ospreys are long-term tenants but there's something amusing about birds just taking for granted that some structure has been built especially for them. It's also wonderful how they've adapted to the modern world.
Florida birds seem to be particularly presumptious. Whole flocks of ibises, the size of chickens  frequently descend on the garden and last night I was kept awake by a screech owl annoyingly hooting just outside the bedroom window like an extra in a horror film.  No, we're the ones who ought to get out of the way. I read recently that, some hundred years ago, the Florida bird population, particularly the snowy egrets,  was greatly depleted because people were hunting them for their feathers, feathered hats being big business. When the fashion for plumes filtered down to the less reputable classes, the upper classes stopped wearing them - as tends to happen.  Which was very good news for the birds. Perhaps they're now getting their own back.
Posted by Alenka at 7:00 PM