I sometimes miss the good old British sense of humour. A friend from Blighty sent me an extract from a phone-in programme that involved a man going on about chocolate mint biscuits and never getting to the point. It's far too complicated to explain in a few words but suffice to say I laughed till I cried, loving the sheer British-ness of it.
It's not that Americans don't have a sense of humour - we can laugh at each other's jokes - but it's not quite, not completely aligned with ours. I can't put my finger on what's different - perhaps a sense of irony, a certain subtlety, I don't know. Possibly American humour can be a little too obvious and in-your face. I sometimes have conversations with American friends and make an off-the-cuff remark that's intended to be ironic and not at all serious and find they've taken it literally and are giving me worried looks.
I don't know if Americans would find the biscuit sequence funny - well for one thing, they wouldn't understand "biscuit". To an American, a biscuit is akin to a giant mutant scone. But then a lot of them do love Monty Python - plus here I go again, generalising, as hubby is at pains to point out. "Not all Americans think the same way!" He understands British humour but he's an honorary Englishman. (And he laughed at the biscuits too.)
Having said all that, I was strolling down our high street, aka Venice Avenue and saw this sign. 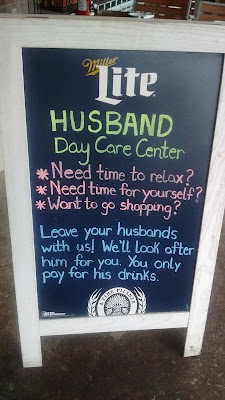 Now that made me chuckle. But then it was outside the Irish pub.
Posted by Alenka at 3:46 PM