Of hope - metaphorically speaking. The passion flower vine, which was ruthlessly decapitated by hands unknown last year, is making progress, painstakingly crawling its way along our ricketty wooden fence with an occasional spurt of glorious colour. 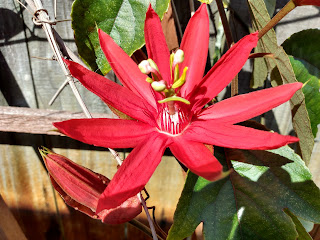 And amazingly the politically incorrect Confederate jasmine has thrown out a couple of blooms. Does it know it's February? 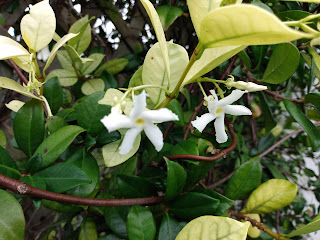 The chilly weather of the past few weeks has warmed up, though it's still very windy.

And, wonder of wonders, hubby and I got the Phonecall, (and the Text and the Email) all buzzing and beeping and ringing and vibrating in a simultaneous cacophony to present ourselves for our first Covid jab, or shot, as the Americans say.

It was one of those days when I breathed a prayer of thanks that we're in the United States of America. After all the uncertainty and chaos of trying to sign up in all kinds of different ways, the event, when it happened, exemplified so much that's good about this country.  We drove to a redundant shopping mall,  requisitioned for the purpose - there was a natty little video on the website showing you exactly where to go - and joined a long, long queue that snaked all the way around echoing corridors, surreally interspersed with the remnants of happier days, shopping trolleys,  a former children's play area, signs pointing to stores long closed down. But the queue shuffled steadily forward, never stopping, everyone dutifully six feet apart. Every few yards we were met by a cheerful volunteer - Florida driver's licence? Great, awesome, now you can put it away - we shan't be asking you again. Consent form? Thank you - now just go that way, to that desk. Here's a number, someone will tell you what to do next and so on. And everywhere someone did. One woman was a discrepancy - evidently one of those who regularly turn up at the end of the day hoping for a left-over jab. A jolly paramedic explained patiently that, no, we don't do that. Then at the last stage in a vast warehouse of a room, stripped bare of all its tills and display racks,  we sat in neat ranks of socially distanced chairs that emptied themselves in strict order - Your turn now - go to number four - until finally a reassuring nurse in blue latex gloves holding number four aloft,  next to her serried rows of syringes of precious Moderna. She must have already done it hundreds of times but still ran through all the questions again with a smile and dispensed advice about moving your arm afterwards so it wouldn't ache. Then she wrote down the exact time the needle went in so we could sit in yet more neatly placed socially distanced chairs  for exactly fifteen minutes.

It couldn't have been done better but the weightiness of it struck me - that we were in the middle of a  - well, not quite horror film - but some dystopian dream. That is mass vaccination. Thank God for it but what times we live in.