What a week it's been.  As a football (the real sort) fan I feel as though I've survived the Cuban Missile Crisis. As it was, the European Super League (sic) folly lasted just a couple of days but days that put years on our lives as we fumed and spluttered and chewed our fingernails and wept in desperation at this dastardly coup d'etat against the Beautiful Game, my football fan friend in London sending me streams of texts and emails with the latest developments every ten seconds. . I seem to have spent the last few days explaining it all  patiently to American neighbours - and even trying to explain it in French to my French conversation group, during which I miraculously came up with the appropriate vocabulary (connards, salauds, etc etc). Well that wasn't too difficult. I remain anxious. This may have crept into its hole for a while but it's not going to go away. They will be cooking something else up. I wish the Glazers et al would accept that they signed up to a sports team not a widget factory but dream on... And all this after hubby and I had had endless conversations about the relative merits of our two football systems, "You mean teams can be promoted from lower leagues?" "Er yes, that's the whole point. It's called competition".

So this morning my walk on the beach provided more than the usual r and r. It's still quite crowded during the day - by crowded I mean more than a a couple of people - I shouldn't grumble - as many so-called snowbirds have put off their trip north for another couple of weeks. But in the early morning there was no one around but the fishermen. And there, surprise surprise, was my old friend the yellow crowned night heron. 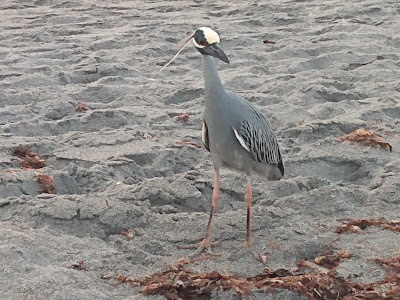 Who fooled me because the yellow doesn't stand out that much. They are rarer, apparently than the black-crowned variety, so I could give myself a pat on the back.

Meanwhile back in the back garden, another friend, a white ibis, was grubbing around in the middle of the lawn. "Watch out!' I said, "I'm about to test the sprinkler system!" The poor chap  ignored me and happened to be standing right on top of one of the jets just as it started up and he shot skywards with a flapping of wings and loud croaks. It must have tickled something awful. It gave me an idea for dealing with the rabbits, who are definitely not my friends.

Again, I shouldn't complain. A friend who lives in nearby North Port was in his back garden when a panther - yes, really, not a bobcat, a panther - jumped over his fence. Fortunately his small dogs were indoors. He should invest in a sprinkler system like ours.