A Whiff of Nostalgia

It was a nice way to spend Sunday. We had lunch at the British pub, which does a mean Bloody Mary. 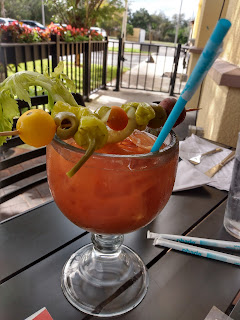 in fact - correction - a stupendous Bloody Mary. In  addition to the requisite fish-and-chips and meat pies, it also offered sausage rolls and Scotch eggs. I decided to go for it, wondering how they would match up to what I used to eat in the old days. (Funny how I never liked Scotch eggs back in the UK but suddenly started to miss them when I got here.) I was a bit dubious at first - given it's so hard to find proper bangers here - but one bite of the sausage roll and I went all dewy-eyed and imagined myself back on Wimbledon station platform wrangling with a hot, greasy, flaky handful. The British pub's sausage rolls were neither flaky nor too greasy but there was a whiff of something authentic about them. Any port in a storm. American-style Scotch eggs are also pretty good with a thinner, crispier outer layer and less of the pink sausage meat. If you get one in a fancy bar in New York City, it's usually soft boiled, which has a whole different feel to it.

The ladies' at the British pub is easy to find: 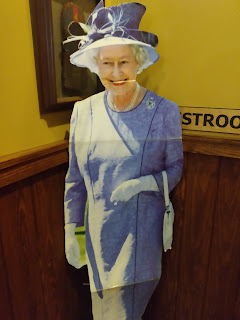 I finally understood the waitress's ( sorry. server's) directions to "Turn left at the Queen."

And then we were were off to a little wilderness experience. Watch this space.