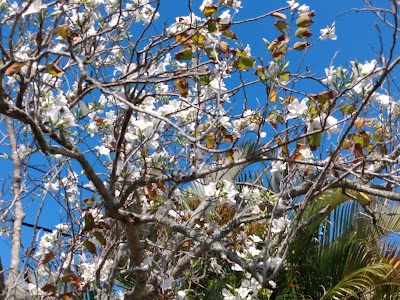 .... has really outdone itself this year! 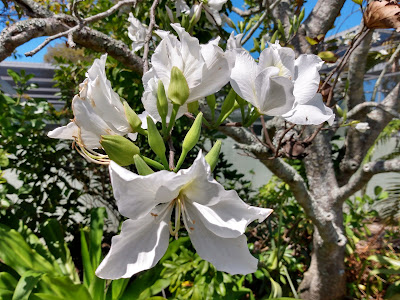 Who says Florida doesn't have seasons? The tree looked sad and scrubby all winter but it's suddenly burst out. Meanwhile the pink one in the front, which is supposed to bloom in winter, still looks sad and scrubby.

The other marker of spring is the huge crowd heading for the beaches. This is the busiest time for traffic, for tourists ambling across the road without looking, for columns and columns of cyclists doing the Florida thing. The beach car parks were already overflowing just after dawn this morning (the clocks went forward last week and it's pitch black in the mornings) and the gazebos had all been nabbed, presumably by people having breakfast. It's a time when year-round residents put on a superior expression and retreat to their air-conditioned houses, keeping their heads down until the tourists all go home again.

But meanwhile, an ethical dilemma. I was pleased to see what I believe is a gulf fritillary caterpillar on my new passion vine. 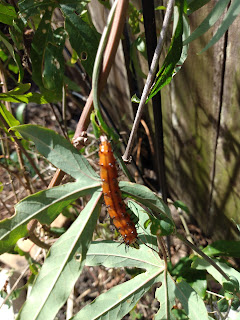 Nice, I thought, that we're doing our bit for the butterfly population. Well, where there was one, there are now at least ten, all chomping away. He obviously told his friends, "C'mon lads, suckers in Golden Beach!" The poor plant is sacrificing itself  for a greater good. I've decided to grit my teeth and let nature take its course - but there jolly well better be some butterflies.

We will miss developments over the next month. Because yes, at last, we're actually going back to Blighty. It's been a long time and I feel my old stamping-grounds may be much changed. So watch this space...