Bleak and blustery at the beach this morning. 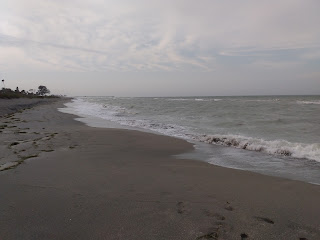 Although there was a warm wind blowing, it seemed ominous - I suspected it would soon turn cold, which it did.  Adding to the atmosphere a flock of black birds tried to fight their way against the wind.      I'm not sure what this is but it's been there a while, so it wasn't blown in this time. 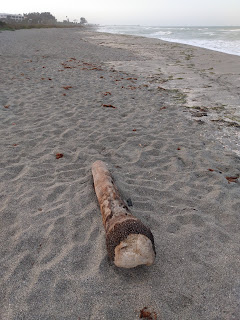 It's interesting how the weather changes here - from hot in the morning to - they say, down to 40 degrees F tonight, so I've had to cover the planters again. It will be a shock for the plants - the Confederate jasmine's been blooming for a couple of weeks. 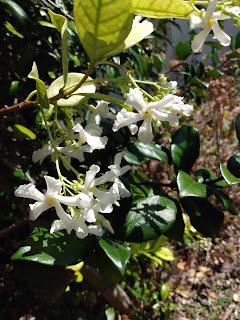 And just the other day we were riding again in Deer Prairie Creek Reserve, mopping our brows, dry sandy dust blowing in our faces. The horses were OK as they'd just been clipped. Yes, even in Florida, their winter coats sprout and need attention and they have to wear rugs at night. 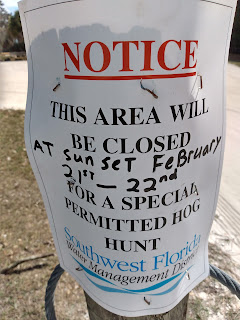 Special it might have been but I'm not sure how succesful the hunt was. Some people who rode earlier said they'd seen three of the blighters still very much alive and kicking.  And busy churning up the ground again. Going later in the heat of the day we saw very little in the way of wildlife - a black snake slithering out of our way,  a couple of kayakers on the Myakka River, which was too high for the alligators to bask on the banks. Someone suggested they'd opened some gates somewhere to get ready for the rain. But we did see some gorgeous birds overhead, swallow-tailed kites, probably on their way north. 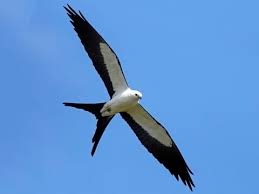 Sadly this isn't my photo.
And then driving home from the park this bucolic scene. 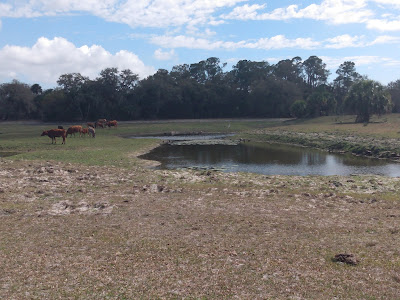