Peace and Quiet At Last

It's frustrating, in my current largely incapacitated state, not to be able to make the most of that blissful Florida coastal time when a lot of the northern visitors have started to leave. Traffic is lighter, the beaches and restaurants are emptying a bit and it is lovely here, with the rainy season not quite started, hurricanes not yet on the way and the sea turtles starting to nest. Well I can enjoy it a bit. There's less gardening noise and even less building noise - although the new house on our street still hasn't been finished. The workers turn up sporadically, half-heartedly saw a few things and then hop off home. The house has a gleaming metal roof which looks terrifyingly hot - and when it rains it must be like living inside a steel drum. But metal roofs seem to be all the rage at the moment. It seems it's a very long time since the old house was knocked down and the new one started. Everyone hopes we'll soon lose the portaloo, the beeping reversing trucks and vans and cars parked all over the place and get our street back - until the next demolition that is. But it will never be the same again, with the new white edifice with its grand entrance and tiny window slits like some fortified castle, lording it over the smaller houses. Personally I saw nothing wrong with the old house - not to mention the beautiful tree which was sacrificed in the name of progress. But sadly it's happening everywhere on the Island.

And speaking of hopping, the other day, with my new-found freedom of using a walker instead of crutches, I managed to hop and shuffle from the car to the boardwalk at Caspersen beach. (Golden Beach doesn't have a boardwalk - you have to negotiate the sand dunes and I'm not quite ready for that.) 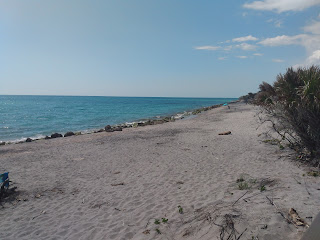 See what I mean by emptier?  Maybe I'll be able to get a swim in soon.
Posted by Alenka at 8:45 PM