I took a chance to see if my broken leg (now well on the mend) and painful arm (from too much pulling weeds and using crutches, walkers and sticks for weeks) could sustain a short voyage on Titanic ll. It was too good a day to miss - Lake Erie was sparkling and there weren't that many power boats out. I live in hope that they're finding fuel too expensive right now and staying in harbour. 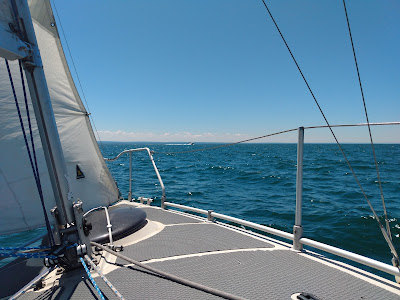 I was a bit optimistic. Until you're injured you don't realise just how much clambering about, balancing, crouching, clinging on, pulling things etc there is to do on a sailing boat, even if you're just along for the ride and hubby does all the hard work.  The first tricky bit was getting aboard. Not able to step over them, I tried crawling under the lifelines and sort of rolling from the dock onto the deck. The gap between them that I'd always happily skipped across now looked terrifying. Then, when the pretty waves started building and the powerboats started burning the children's inheritance with gusto and playing their usual dirty tricks of shooting straight across our bows, making us rock and roll, it got rather too exciting, even for hubby.  So we called it a day and turned back. But all in all it was worth it. And I even managed a bit of steering. Onwards and upwards.
I have always grumbled about the buildings near the marina in Buffalo - grey and grim and brutalist. But this time I got a surprise. 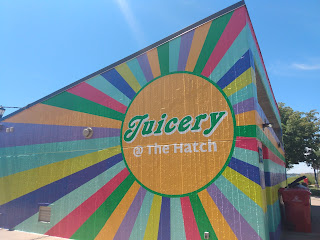 "What in the world is that?" I asked hubby, thinking the city authorities in their wisdom had finally allowed some independent pop-up cafes to cheer the place up. He disabused me. "Don't you recognise it? It's the loos. They've just painted them." Well it's a start I suppose.