It's what I frequently call the triumph of hope over experience. A few weeks ago I was gripped by that feeling of joy and expectation, as I looked around the Jungle and saw festoons of baby blueberries and thought how the winter deer-proofing had paid off, along with my sloshing coffee grounds all over the bushes, as my wise elderly neighbour had suggested. I looked forward to a magnificent harvest. 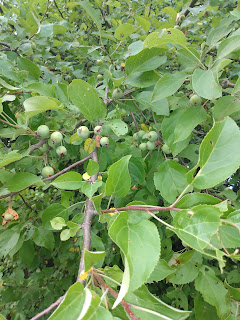 And here, close by were wild blackberries, tiny but they'd soon be tasty. (Actually last year I thought they were raspberries but my clever identification app tells me they're a type of blackberry. Since the app is right about fifty per cent of the time, I can choose, so this year they're blackberries.) 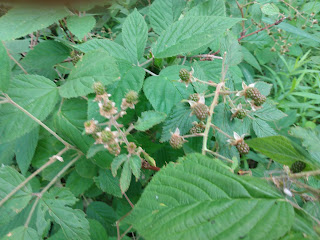 The apple tree which split a couple of years ago had doubly recovered, complete with incipient crop. (In the Jungle, you never know which apple trees are going to produce in which year. It's always a surprise.) 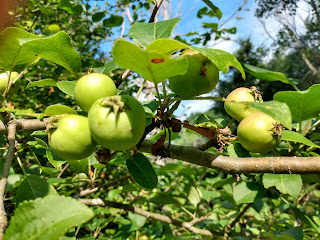 Not to mention some promising-looking cherry tomatoes which I bought from a man at the Garden Festival and suspended in a hanging basket, the best I could do to keep them away from the chipmunks. I have given up on trying to grow tomatoes anywhere near the ground. The chipmunks grab them when they're still green, pull them off the vine, take one bite and discard the rest. 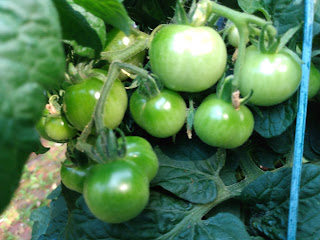 Ok, so how do things look now? Well the blueberries are still green, with the exception of the small bush I bought last year which is totally stripped. Thank you again, chipmunks. The stripy scamps are fast becoming our Alpha Pest. When something is small enough to get through the fence mesh and in any case is adept at burrowing, trying to grow anything is well and truly hopeless. As a result, as soon as a berry turns vaguely blue I pick it off and eat it before something else does - it may be sour but it's a small victory.

I can't pull the same stunt with the blackberries, which are still red - and noticeably fewer in number.

I do, however, still entertain some hope for the tomatoes. 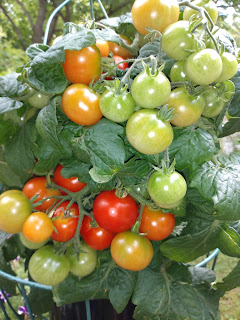 There has definitely been some progress here. Just enough to keep up my misguided faith in the innate benevolence of Nature.

Progress report on the flowers coming shortly. Watch this space......