We breathed a huge sigh of relief when we heard that Hurricane Ian had left our house unscathed. It had been due to hit us head on, then in the last few hours veered slightly southwards - good for us but very bad for poor Fort Myers Beach, which was, by all accounts, obliterated. Part of our garden fence blew down and we lost our orchid tree but that's relatively minor compared to what happened to others.

Having just arrived we've been picking up bits of tree and propping up what's left of the fence and tying it up with hubby's boat lines, which should withstand a gale.

Even here, the streets tell a doleful story.

Remember the beautiful Royal Poinciana tree with its orangey-red blossoms? 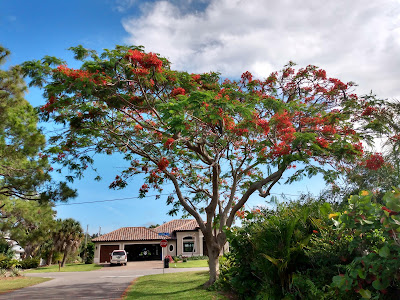 Here's all that's left of it now. 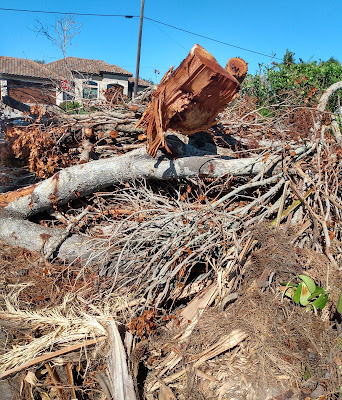 At least this road sign is still standing, after a fashion. 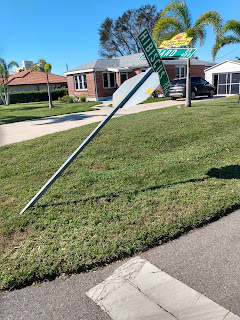 Palm fronds and branches are piled up in front of the houses. 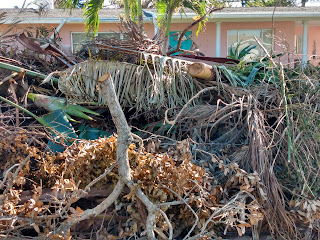 And the streets are still lined with piles of debris. The trees that survived are looking a lot thinner, shorn of leaves and limbs. 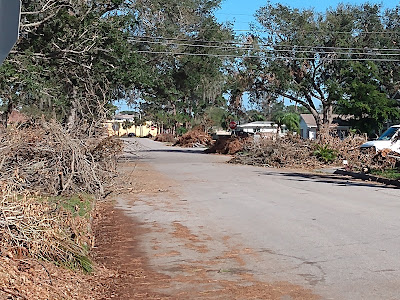 A utility pole hanging by a thread. 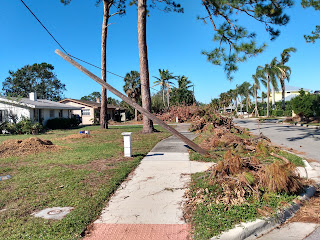 And the air rings with the sound of chainsaws. 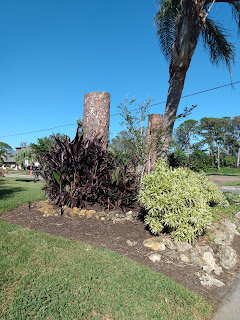 Up the road in Historic Downtown the hundred-year-old theatre was practically destroyed, roofs taken off buildings and mobile homes splintered. But thank God we didn't get a storm surge with flooding up the inlets and gullies. Further inland, the riding stables survived but was flooded and for a time there was no way to feed the horses. They are appealing for funds to help - horses obviously aren't a priority for the official disaster relief. One farmer lost 250 cows, which died of shock.  On our road trip south, sister-in-law and I drove through the little rural town of Arcadia. There was still a lot of flooding, the road we wanted to take was closed and we saw at least three RVs - giant caravans - turned upside down, one standing on its end against a tree. Practically every house had a damaged roof, covered in bright blue tarp. Most poignant of all, a pile of personal possessions thrown out by the roadside - furniture, toys, clothes, all drenched and ruined.

Earlier we'd driven along the northern Florida coast which suffered a serious hurricane a few years ago. The town of Mexico Beach had been flattened, as Fort Myers Beach is now. But rows of spanking new houses in pretty pastel colours were going up - on stilts to avoid a storm surge. The triumph of hope over experience.

More on the road trip coming shortly. Watch this space....