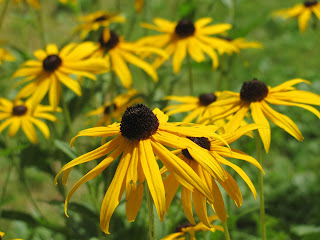 The end of summer is fast approaching and my flowers are fast fading - those that escaped the ravages of caterpillars, Japanese beetles, slugs and other marauding Western New York fauna.
I am a novice when it comes to Western New York gardening – or any gardening for that matter. My late summer garden  has been a sea of yellow, since the daisy-like black-eyed Susans  multiply like weeds around here and thrive in the cold winters and sharp temperature changes that kill off the more temperamental plants. So my repertoire has been limited to them and a few other hardy types, though I draw the line at hostas,  those dreary bunches of leaves sending up spindly stems topped with tiny, anaemic blooms, that all my American neighbours seem to love.
But I would like to be a bit more adventurous and earlier in the summer,  I noticed an announcement advertising a “Garden Walk” in aid of the local homeless shelter. For a small fee,  we’d be invited to see the best efforts of our local green-fingered (Americans say “green-thumbed” ) enthusiasts.
Interestingly, this side of the pond, they don’t use the word “garden” in the British way. Here, if you mention a “garden”,  people automatically think of a vegetable patch, although it can also mean a flower bed.  Some small nephews once visited us and I suggested they go out and “play in the garden”.  They looked flabbergasted and then delighted  and were just about to get their football and  trample the petunias to smithereens, when their mother fortunately stepped in to translate. “No! She means the yard!”
And while we’re on the subject, the word “walk”, as in “Garden Walk”, doesn’t actually mean a walk. It’s a well-known  fact that you can’t easily separate Americans from their cars.  “Walk” is just an expression. I would, hubby warned,  have to drive to all these gardens and probably a long way. He was right.
Ascertaining that the gardens would actually contain flowers,  I bought my ticket and map and set off.
The houses taking part were marked with blue-and-white balloons and a sign outside.
One of the first gardens belonged to a retired doctor.  He was as happy as Larry, having found his true vocation, nursing along a sea of gorgeous red poppies and other exquisite flora like paprika yarrow and rose campion. He kindly gave me some seeds.
There were cottages with white picket fences,  log cabins with sweeping views over the hills, ponds with darting dragonflies. And there was the Manor, an unlikely name for this modest part of upstate  New York  – we’re not the swanky Hudson Valley here. The  balloons at the grand gateway had popped and at first I wasn’t sure if I’d come to the right place. I didn’t want to encounter some irate owner with a shotgun. But the Manor turned out to be not that grand, the chatelaine  a typical friendly Western New Yorker, “You’re from Britain! Oh do come and visit again!”  But the rolling grounds with their specimen trees and lake might have been designed by Capability Brown. That’s the beauty of this part of the world.  You can pick up a Manor for the price of a small London flat.
As I  wandered  all the emerald-green lawns,   the pergolas swathed in purple clematis, the winding stone paths and pristine decks,  the flowers  three times as tall and five times as vigorous as mine, with even the hostas looking perky, I started to feel just a mite inadequate.  American gardens, I’ve discovered,  differ from mine not least because they’re so neat and tidy, the beds perfectly edged, the bushes perfectly trimmed and everything snuggled in perfectly uniform mulch.
Sighing, I resolved to redouble my efforts to get my weed-infested jungle under control.
But as I drove home, I noticed the wildflowers by the side of the road. They’re in their blue-and-white phase now.  And they’re lovely.  And no-one’s spent hours mulching them. 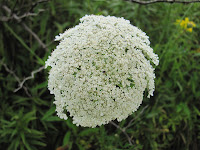 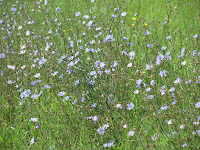