Of the old-fashioned, feathered variety. I'd always thought cardinals were rather stupid birds. The males are pretty and bright red and feature on Christmas cards like robins do in Britain. But they have an extremely annoying and monotonous song that's had hubby getting up at dawn and yelling "Shut UP!" out of the bedroom window. They also sit goofily on the feeder, not eating, just contemplating their navels and getting in the way of everyone else.  The female cardinal  (that doesn't sound quite right) - 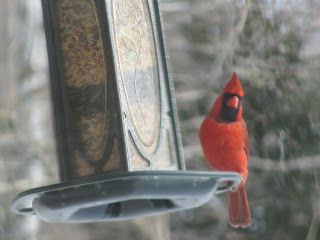 here she is below, on the left, with an American goldfinch on the right - is given to dashing herself neurotically against the window panes. 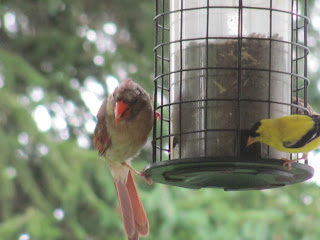 The cardinal clan appear to have been up to something in the large bush under the feeder. You can periodically see one dive-bombing or bellyflopping straight down into the bush as if it's been winged. Consequently, the bush has a crater in it.  Anyway, the other evening, hubby called me, remarking that there was a lot of noise going on. There seemed to be a couple of unusual-looking smaller birds on the grass. At first we didn't make the connection. Then we saw Mrs Cardinal - who's better than her bloke at balancing on the feeder - flying up to it, grabbing a sunflower seed, then flying down and seemingly head-butting the smaller birds.  Finally we realised what she was doing. The kids were still too young and clumsy to fly up to the feeder... so 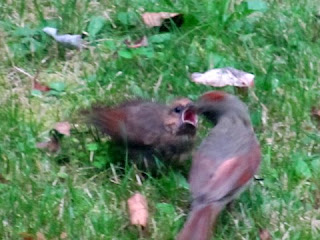