Rural Crime: Who Nicked the Corn? 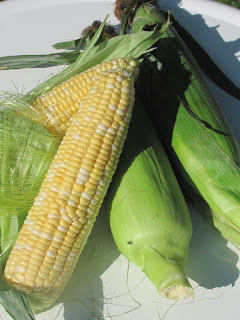 Now here's a mystery. Hubby left a couple of ears out on the patio table overnight, in a plastic bag. The next morning, they were gone. Vanished. The plastic bag was later found, under a tree, much the worse for wear but of the corn, no trace. Now, who could be the culprit?  Too big for Chippy, even with his brother-in-law's help. Too cumbersome for the crows. Not sure deer would be that interested. Woodchucks like corn but I doubt a woodchuck (especially as they're so fat at this time of year) could climb onto the table. The turkeys would probably just have pecked at it, not swiped the lot. We haven't seen large squirrels around here for a while. That leaves a raccoon. Or just possibly a bear. The plot thickens but I doubt we'll have an answer any time soon. Such are the great mysteries of the universe.
Posted by Alenka at 4:00 AM