Late on the night of New Year's Day, the phone rang. . We were having an early night, ready to leave for the airport at 7am for our flight to Florida and it woke us up.  A robot was on the line. Our flight on United had been cancelled. Helpfully, the robot suggested we fly two days later, or rather hubby fly the next day via a different route and I fly two days later. Typical robot attitude.  Not good. We were planning to be somewhere else at the weekend. A complicated phone call ensued and we were rebooked on US Air via Philadelphia. Accordingly we set off for Buffalo Airport after all, crawling through the snow all the way. This is what the airport looked when we got there. It would strike terror into the hearts of my British friends. "A mere dusting!" said the girl at the gate. 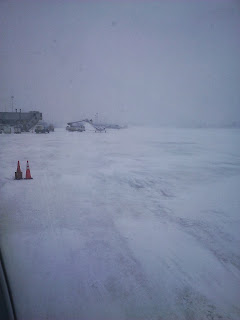 The flight before ours was delayed.  "It will be a miracle", said hubby, "if we make our connection". The connection being just one hour. "Funny", he added, "that it's only United flights that have been cancelled." Everyone else seemed to be trying to make a go of it. But possibly that was because United would have connected through Newark and Newark was currently resembling Antarctica. Buffalo, however, was making the best of things. 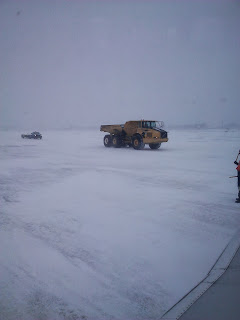 Incredibly, our plane appeared at the gate, looming up through the mist. We would be taking off more or less on time, probably the only flight that day to do so. Sometimes you just get lucky. 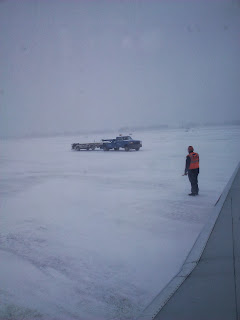 After we boarded, though, there was a small delay for some energetic de-icing. There's the de-icing truck from the plane window... 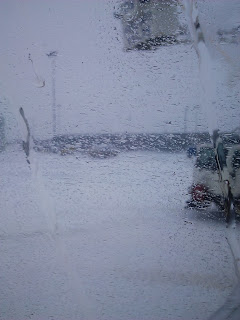 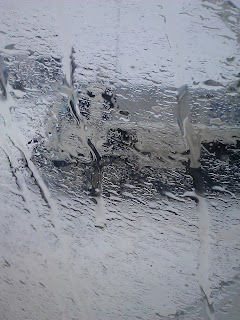 Energetically spewing out green goo - not a bad abstract painting. 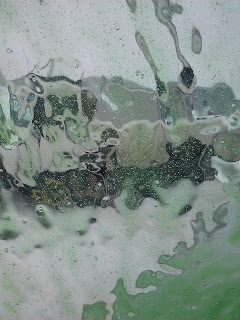 There it is, coating the Canadair's wing. The stuff used to be orange. Maybe this is the heavy duty kind. The temperature was in single digits. Single digits Fahrenheit, that is. That's global warming for you. 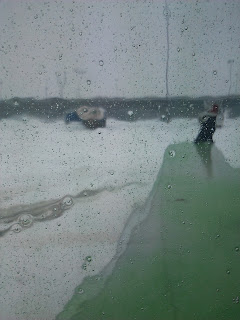 And finally we come in to land in Philly. Slightly above freezing and not a snowflake in sight ... 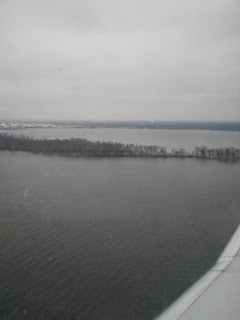 .......yet. That night they were predicted to get 7 inches. But we'd beaten the storm and by the time it came roaring in,  we'd miraculously made our connection and were winging our way to Fort Myers. 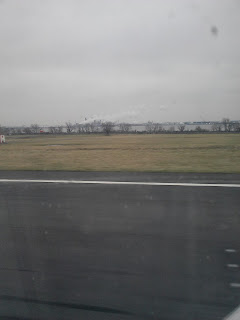 So that's where all those baggage trailers go. 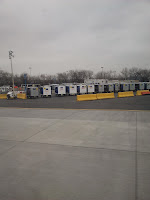 Thank you, Philadelphia and the much maligned and soon to disappear forever US Air. You came through for us. Florida here we come!
Posted by Alenka at 2:43 PM