In America public art galleries are called museums. Perhaps because it's a relatively young country. This is the Museum of Art in Columbus, the capital of Ohio. 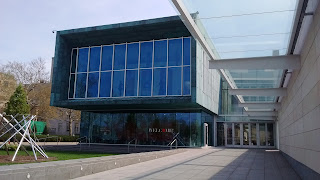 I should say it does have some nice old parts too. 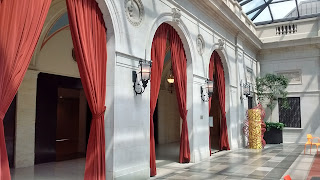 Sadly I can't show you the paintings, as I don't want to fall foul of the rule that photography is for personal use only. But take my word for it, there was some lovely stuff there, like Eugene Boudin's "Bordeaux: Boats on the Garonne" and a great 17th century Dutch Still Life by Carstien Luyckx, with the most realistic-looking lobster. You can google them. They knew how to paint in those days, unlike (call me a Philistine) some of the modern masterpieces on show. At one point, I said to hubby, pointing across to one display, "1870s..." and then to another,  "...1970s. What happened?"
But it increasingly seemed that this was not so much an art gallery, art museum, whatever, but more a place to score political points.  Visitors were encouraged to place post-it notes with their comments. 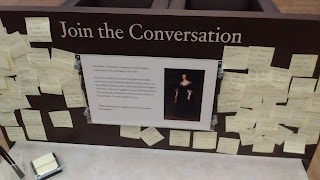 Take my word for it again, very few of them had anything to do with art.  And don't get me started on what they were selling in the gift shop.
But some people weren't fooled. You can just about read what this, (presumably young)  visitor said, on yet another message board. 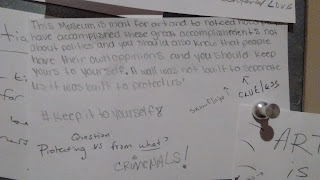 Here's a bit of it, "This museum was ment (sic) for art and to notice how people have accomplished these great accomplishments not about politics...."  Just about right, in my opinion. You can have message boards anywhere and long live free speech but personally I'd like to have seen a bit more beautiful art. Compared with some of the magnificent art collections I've been to in other American cities, this was a trifle underwhelming.
Posted by Alenka at 3:01 PM