Sometimes,  amid all the frustrations of life, you get a magic moment.
Hubby and I were contemplating where to celebrate our wedding anniversary.  Rural western New York isn’t big on what Americans call “fine dining”,  though there are one or two decent places specialising in local delicacies like chicken wings in spicy sauce and beef on a salty bun.
This time we decided to give them a miss and headed eastwards towards a lake with the unpronounceable name of “Chautauqua” – which in one of the Native American languages might mean “bag tied in the middle”, or, on the other hand,  might not.  Hubby used to keep his boat there and remembered a restaurant with a pretty sunset view over the water. 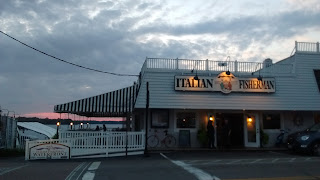 The restaurant was in a little lakeside settlement called Bemus Point. 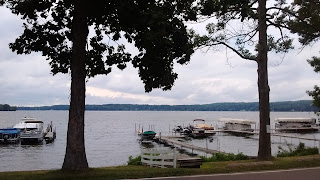 With just a few concessions to tourism. 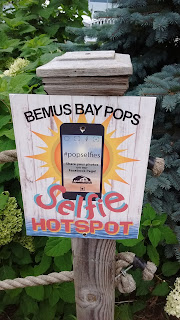 In 1811, one Thomas Bemus started up a ferry service with a log raft across the narrowest point  of the lake, the middle of the “bag”, in other words. 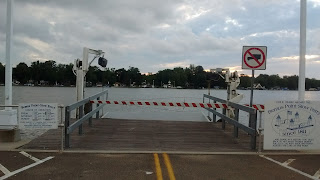 And the ferry has been in continuous use ever since, 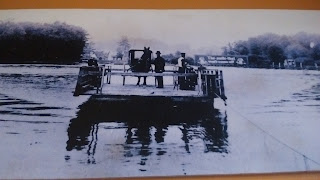 more for nostalgia than anything else, now they’ve built a motorway bridge. 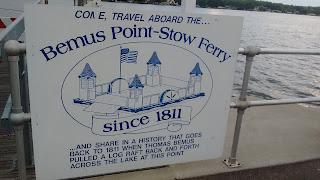 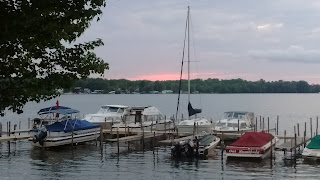 A few boats bobbed in the docks and seagulls perched on the posts. On the ferry ramp, a solitary fisherman patiently waited for a catch. 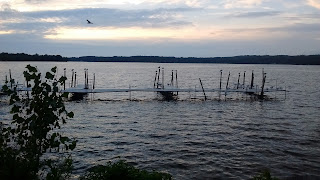 We sat admiring the lake. It seemed too cloudy for a good sunset but the food passed muster, even if spicy chicken wings had made it to the menu.
Afterwards we strolled through the village, past a shop selling live bait,  “Our worms catch fish or die trying” and an ice cream shop where I joined the queuing kids and got a “baby-sized” cone – more like baby elephant size, this being America. There were a couple of gift shops, or, more specifically, shoppes, a tiny Catholic church and not an awful lot more.  Except for some newish holiday flats that would have looked more at home  in Florida, glitz and commercialisation had largely passed Bemus Point by. 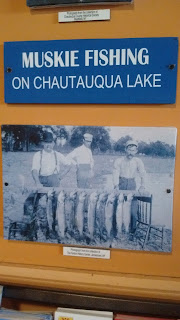 And everyone we met said hello.

We walked down to a building that called itself the “Village Casino”,  which didn’t augur well but it proved to be a venerable dance hall and the only gambling in evidence was in the shape of a few old-fashioned amusement arcade machines, the kind where you try and fail to fish out a toy.  On the walls were photographs from the 1940s and 50s of big band stars and singers who’d performed here once upon a time, including Count Basie and Frank Sinatra, no less. 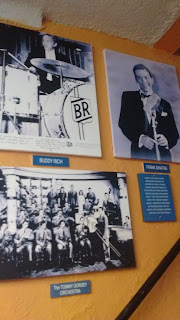 And further back towards the village was an old, wooden hotel with rocking chairs on the porch. 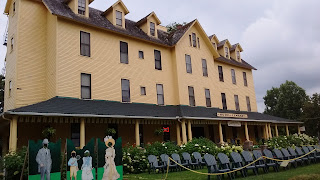 And more selfie ops out front. 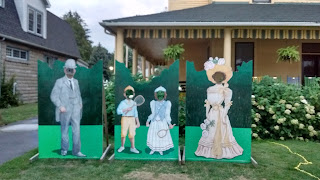 There was a piano lounge,  a dining room with chintzy wallpaper,  a telephone booth now converted into a cash machine. It’s a short season. The hotel is closed in winter when the lake freezes over and the only tourists are intrepid ice fishermen.

A display on a table told us the hotel had a ghost – actually several ghosts, all very friendly, including a  “kind and benevolent” nun, who’s “watching over” things.  A photo of some party-goers sitting on the stairs claimed to show her hovering spookily on the landing above.  It looked more like a guest in her nightie complaining about the noise but I’ll give them the benefit of the doubt.
We walked back outside and looked towards the lake, still wallowing in our happily nostalgic feelings. Suddenly the clouds parted a little and the vestiges of a pink sunset blossomed across the sky. While we watched,  the unexpected happened. Out of nowhere,  the strains of a lone trumpeter echoed over the water, playing, poignantly, beautifully,  “Taps”, America’s equivalent of the Last Post.  We traced the sound to the balcony of one of the flats. The musician leaned out and waved,  “Bet you wondered what this old geezer thinks he’s doing!”
“You made our day!” we called back. It was perfect, just perfect. 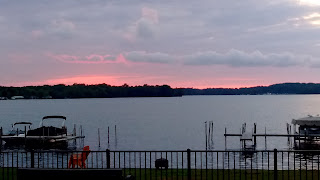