Fog shrouds the lane on these early mornings. 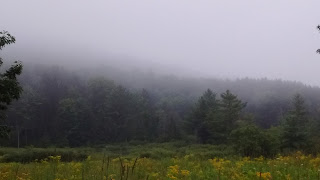 And the journey into town is a perilous activity. Deer are only waiting to cross just where it's at its thickest. (You may remember that, in my first couple of weeks in America, on just such a foggy morning  I was following hubby and a deer ran into his car. I stopped behind him and another deer ran into mine. Both cars and sadly both deer were written off, or totalled, as they say here.) 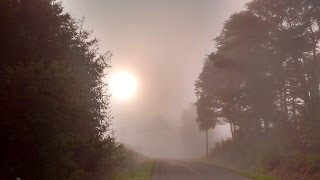 But one of my pet peeves about America (or perhaps just western New York) along with noisy lawnmowers unnecessarily mowing huge expanses of lawn, excessive air conditioning and cinnamon, is people driving without lights. And there seem to be more and more of them. 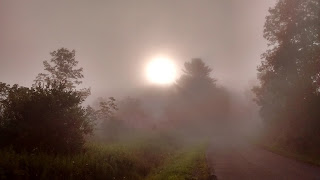 I'm not sparing their feelings. These people are stupid. crazy idiots,  especially as most of them seem to drive grey cars, so you can't see them till they're almost upon you. I don't recall drivers doing this in Britain. 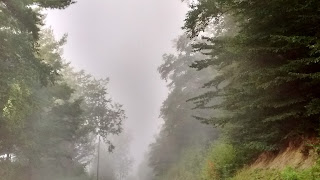 And while a police car has taken to lying in wait to catch motorists coming out of the village a little too fast, I haven't, so far, seen the forces of the law tackle these miscreants. One of these days there will be  a horrible accident and don't say I didn't warn you.
Posted by Alenka at 5:41 PM