Strolean was a recent event in our local town, Olean (Get it?) They've beautified Union Street, introduced five European-style roundabouts (don't worry, neighbours, I'm sure you'll soon learn to love them) and want to encourage people to stroll around, also in European style, visiting the businesses and restaurants.  Bring it on, I say. To kick off, they had Strolean, with stalls set out outside the various businesses. For me, it didn't start off too well. I was going round one of the roundabouts when a chap on a bicycle, looking like Father Christmas on a summer holiday, sporting a red shirt and a white beard came round it the wrong way. Not only that but when I hooted frantically, he swerved towards me and shouted "Yah!" On second thoughts, perhaps some people will never learn to love the roundabouts and like staging their own mini-protests. Anyway, Strolean was a very nice idea, even if the day was a little windy and involved some struggling with stall canopies. 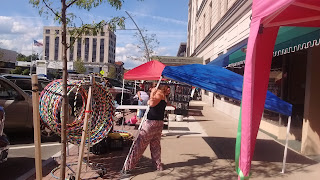 This sign was outside the whisky shop. A "mashing ' class sounded interesting. 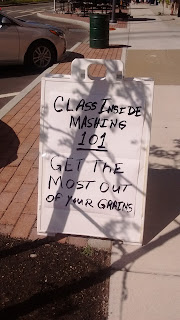 On another day, perhaps. The singer outside the Beef n'Barrel was good. I hope some more people came along later in the day. 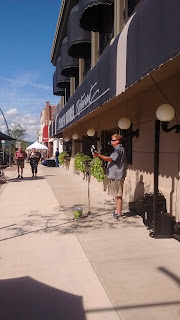 Meanwhile the bourbon bottle windchimes gyrated in the breeze. They almost made me get over my wind chime phobia. As long as no one hangs them anywhere near my house. 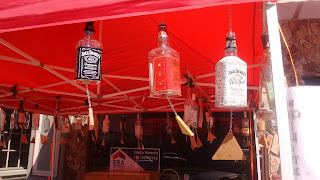 This is the logo of the local American football team, the Buffalo Bills. American football is not my first love but I wish them well. It's about time they had some luck and success in the new season. If Man United can come out of the starting stalls at a gallop, so can they. 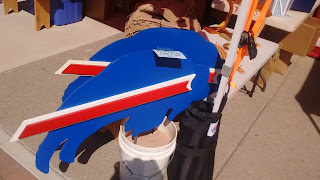 Here's one of the fabled Olean squirrels. Remember how London once had cows appearing all over the place, painted with different designs? Well Olean has squirrels. 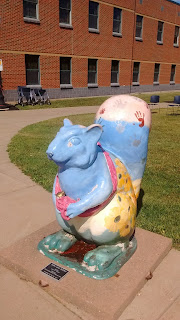 I like this row of flat-fronted shops - so charmingly American. 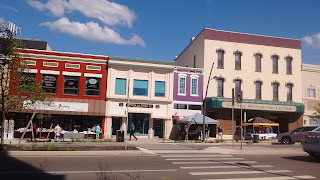 Sadly a lot of the nice old buildings in town got pulled down due to "Urban Renewal" (sic). That included what, by all accounts, was a magnificent old theatre.
I think the gentleman below is supposed to be a gangster. There were a few of them here in Prohibition times. 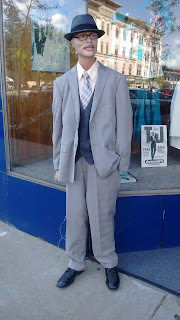 A peak inside the windows of an old closed- down pharmacy. The wooden cabinets which housed lotions and potions are still there.  Too bad so many local businesses have shut up shop. Maybe the new, appealing road layout will bring some back. 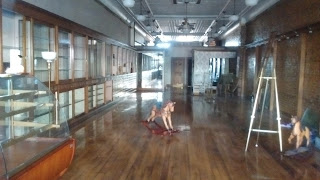 A sweet way to advertise your insurance business. 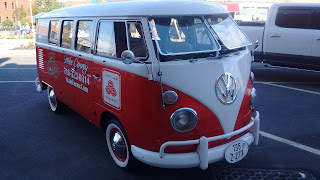 There were some "antique" cars too. 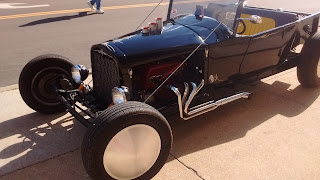 This old Ford was my favourite. 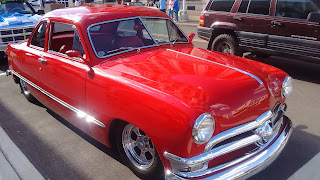 A small crowd had gathered around this energetic performer. 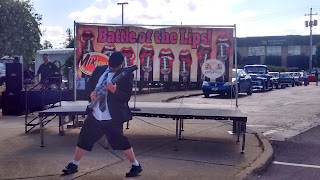 Though I don't know why he was dressed as Billy Bunter. 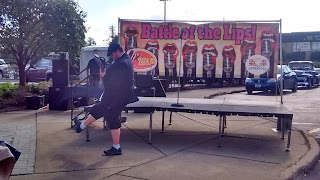 I asked hubby if they ever had Billy Bunter in America and he said no.  I don't think they'd dare revive him now. Body-shaming, I think it's called.
I have to say I had no idea how many interesting businesses there were in town. I munched a (American style) scone sample from the new Union Tea Cafe and rather rashly bought a flamboyant fluffy winter hat from the Alpaca Farm. I think I will take it to London.
The best of luck to them all.
Posted by Alenka at 4:12 PM