Further down the road found us in Sumter, South Carolina. It was one of those happy and all too rare occasions when we managed to find a hotel downtown within walking distances of some decent restaurants. In so many places, the reasonably priced hotels all congregate around the motorway exits and the only food you can walk to is McDonalds.  It was a lovely warm evening and we sat out at a pavement bar called Sidebar and ate pulled pork and excellent salad and imbibed some tasty cocktails. It was only marred by some loud motorbikes revving up and showing off but even they didn't stay too long.
Sumter turned out to be full of history and interesting houses. It was named after a Revolutionary War General - yes, the same chap who gave his name to Fort Sumter, where the Civil War started.
Sadly, once again, we didn't have time to explore but decided to drop in the next morning on one of Sumter's favourite attractions. 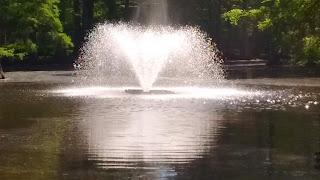 This was Swan Lake and Iris Gardens. It was too early for irises but there were plenty of swans. 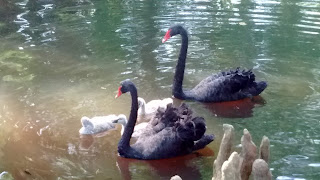 In fact it claims to be the only park in the United States that has all eight species of swan. It was still early and there was no one around. Someone was having a beauty sleep. 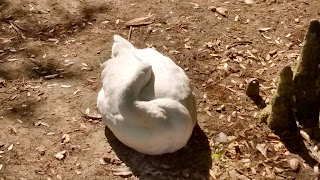 Hey! Who woke me up! 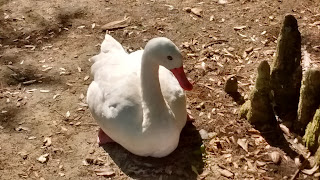 Cygnets abounded. On these occasions you remember what your mother told you. "Careful" I said to sister-in-law, "don't go near the ones with the babies!" 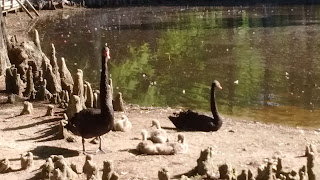 Then I spied some turtles in the water. All right, Americans grow up with them but I haven't seen that many in my life. I thought I'd get a picture. 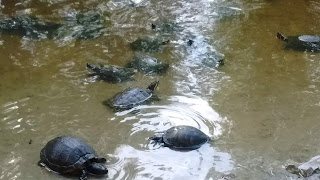 And one of the duck chasing the turtle..... 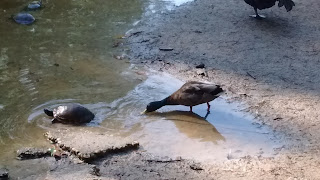 ....Big mistake. The turtle beach was next to some feeding stations. They looked very swanky. A sort of Sidebar for swans. Well one of them - possibly one of those big fat white ones you can see in the middle - must have been at the cocktails or having a bad feather day. 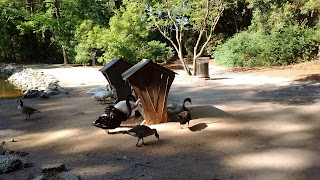 The next thing I knew, I was under  attack. The big, fat white one went for me tooth and nail - though, fortunately swans don't have teeth, with a sustained onslaught of ferocious nipping all down the back of my legs. It was like being pinched by your worst enemy in primary school. And it went on and on. Of course it was warm and I was wearing shorts. "Ow!" I shrieked, "Get away!! Help!"  Sister-in-law burst out laughing. Laughing! I ask you!  I ran for it but still ended up literally black and blue.
They really should have some warning signs. They have them on Wimbledon Common - that swans can break your arm, murder your dog, etc though I don't remember them saying anything about biting.  I was traumatised enough - dread to think what it would have done to a small child. 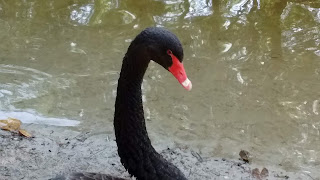 I'd like to come back to Sumter but Swan Lake can do without me.

To be continued.
Posted by Alenka at 9:20 AM