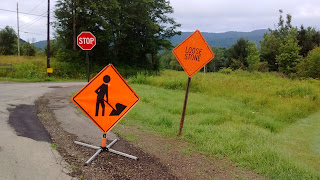 Or more annoying than the beeping you get from reversing lorries aka trucks. The other day we had a whole symphony of them, working on patching up the road surface. Truck after truck heading up and down the lane and each with its own musical (sic) pitch. In our hilly country you can hear them echoing all over the place which makes it ten times worse. Here's one going past the end of our drive. I believe it's the same one they attach a snowplough to in the winter. 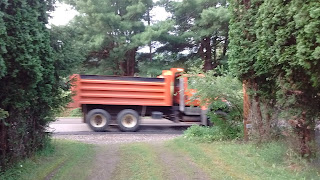 And here's the lane partly finished. For once they were reasonably quick about it. 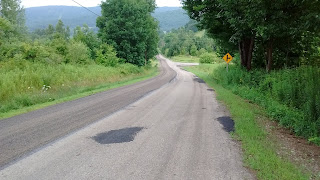 Our tax dollars at work as hubby would say. They seem to have done an OK job if they would only lay off the beeping. Elf and Safety again.
Though one thing I never understand about this part of America. They spend all summer digging up roads and patching potholes and the next spring it's just as bad and they start again. The charitable explanation from hubby is that the freeze and thaw sequence in the winter wreaks havoc with the roads and then there are all the heavy trucks cutting up the surfaces. I say that the Americans have many good qualities but they are nowhere near as good at building roads as, say the French. Plus they take ages over it.  One tiny bridge took about five years to finish and the motorway to Buffalo is in a perpetual state of cone-inflicted chaos. You'd think someone would invent a better way. Or perhaps there are too many vested interests in the local road building business looking for their annual windfall.
Posted by Alenka at 11:09 AM