What on earth will be next in the wildlife circus we live in?

The handyman was working on the outside of the house when I heard a shout and he burst in through the screen door, white as a sheet,
"There's - there's some kind of animal out there........ 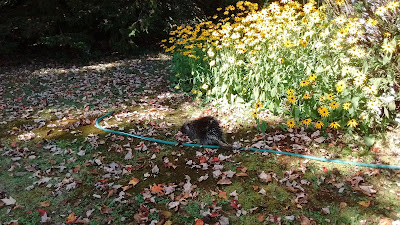 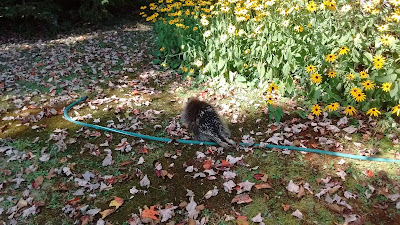 "Do you think - could it be a porcupine?"
"Yes",  I said - the Brit to the lifelong western New Yorker -  "that's definitely a porcupine" And I added optimistically, "Don't worry, he won't hurt you."
Then I started to have second thoughts. "Don't go too close in case he shoots his spines out!"
"No he won't!" Hubby had emerged behind the house, "That's a fallacy".
"But what about the neighbour's dog? He turned up at the door looking like St Sebastian shot through with arrows."
"Well he was probably trying to bite the porcupine. The spines have barbs so they get stuck." 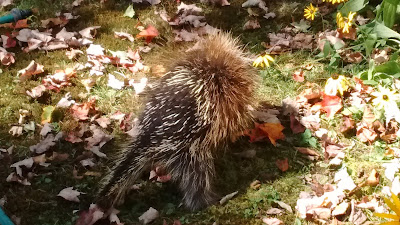 I wasn't about to get close enough to find out. But the handyman had downed tools until such time as the new visitor left.  I grabbed the hose and tried a gentle spray. Mr Tiggywinkle turned and looked at me, "You cannot be serious!" and waddled slowly, very slowly under the bush right where the handyman was working. 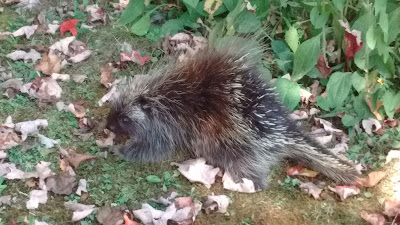 Hubby tried the same trick on the other side. Very nonchalantly, the porcupine emerged again and waddled down the hill and out of sight.
Last week we had family staying,  including a tiny rescue Yorkie.  I do not want to think of what could have happened there.
Still, the porcupine, with his little beady black eyes, was quite the charmer. Though we'd prefer he didn't come back too soon.
Posted by Alenka at 10:30 AM