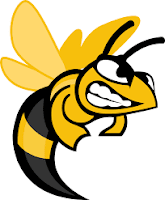 We waited until dark. On one of the few nights when it wasn't raining. Then hubby announced grimly, "That's it - we're going in". He carried the petrol can; I had the matches. And the torch. As the searchlight swept the flower bed, hubby slung an almighty slosh and I struck a match with a gung-ho flourish. It broke.  So did the second one. And the third. "Defective weaponry!", I cursed. Finally, on the fourth attempt, as our helpful commenter (see below) had so graphically described, there was a sizeable "Woosh!" and flames leapt upwards. We stood back to gloat on our handiwork.
The next morning we inspected the scene. There was unavoidable collateral damage - the rudbeckia and the garden phlox slightly singed. There was a small black patch in the flowerbed. And all appeared quiet on the wasp front. We congratulated ourselves on a successful operation.
That was last week.
Yesterday I walked past the patch to have another gloat. I heard an ominously familiar sound. Two wasps were jauntily celebrating their survival. I blasted them with what was left of the spray.
Today I walked past again.  Three more of the brutes whirled around,  defiantly buzzing the wasp equivalent of "Remember the Alamo!" You've almost got to admire them.
Posted by Alenka at 5:01 PM