It's good to be back again to my favourite sunset spot. 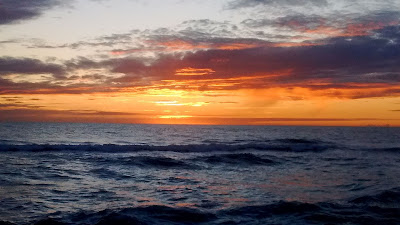 More on the road trip shortly but my arrival in Golden Beach wasn't without incident.  The first night the southern flank of Tropical Storm Nestor brushed us as it swept by. I woke up every half hour to an ear-splitting thunder clap and sounds of rain pummelling and surf crashing. Luckily (in retrospect at any rate) my phone was switched off or I'd have been woken up every ten minutes by screeching tornado warnings. In the morning the rain fell like Niagara Falls. I've never seen rain like it. And the trees were swaying and rocking in the wind. Goodness knows what a real hurricane would be like. The Sun Fiesta (sic) Parade was cancelled, as were the Sailing Squadron races. Hubby on the phone from up north mused, "I expect there was a Small Craft Advisory out."
"Large craft more like and not an advisory either!"
Sunday was calmer. 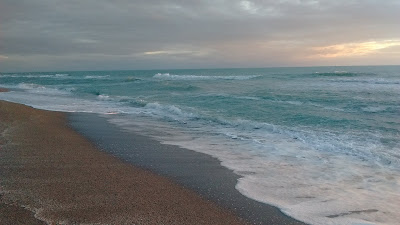 But the storm hasn't brought cooler weather. Yet.  It's like a steam bath out there. Still, I'm not complaining. It's still better than a western New York winter.
Posted by Alenka at 2:13 PM