Did you know that western New York has its own version of the Grand Canyon? It's called Letchworth State Park and you could say it gives Niagara Falls a run for its money too. Especially when it's rained a lot. 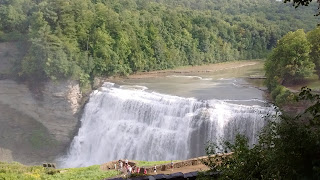 1,000 acres of what's now the Park were bequeathed to the state in 1906 by an industrialist called William Pryor Letchworth. Whether he had anything to do with the Hertfordshire version I don't know.  His hunting lodge looks very American. Now it's the Glen Iris inn and a picturesque spot to have a bite.
I read that Letchworth Park also contains the grave of  Mary Jemison, who was captured by Indians in 1755. Apparently she liked the life and decided to stay with them, had two Indian husbands and seven children. 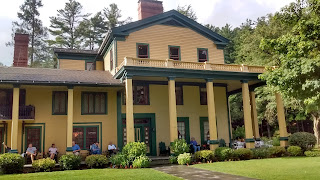 Glen Iris Inn dates from later than that - early 20th century. There's some natty woodwork inside. 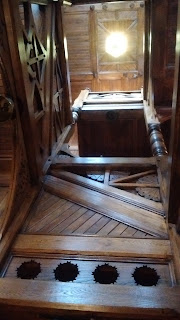 And interesting glass in the doors. 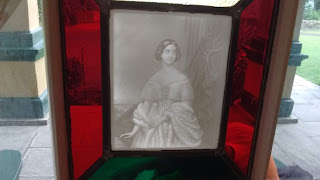 This summer the flowers looked a lot better than mine. There must be plenty of deer in the Park. I'd like to know their secret for keeping them away. Fences don't work. Neither does cayenne pepper, Irish Spring soap or anything else my neighbours have suggested. 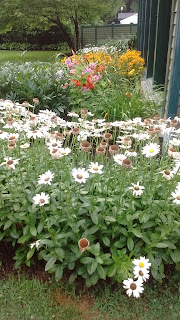 But the best part of Glen Iris is that they do a nice line in local New York wine, from a village nearby called Naples. Letchworth and Naples in the same state,  that's America.
Posted by Alenka at 1:28 PM