Here was another scenic overlook 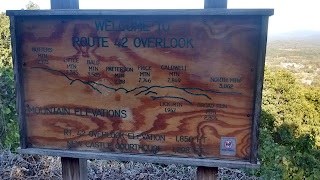 To make the most of. 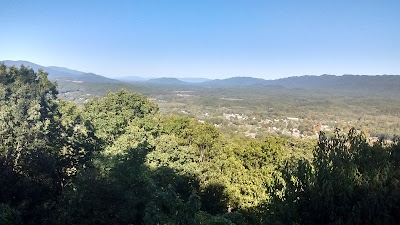 We stayed the night in Blacksburg, home of Virginia Tech, sadly the site of a particularly bad campus mass shooting a few years ago. But today all was sunny, the campus looked cheerful, a new generation of students going about their business - including a bunch of military cadets marching along.
Then it was on to North Carolina, where, in Yadkinville, we found another good coffee shop, a tiny hole-in-the-wall place called Jarro, apparently the name of a Mexican coffee mug. The coffee was good but even better were the small "cheesecake tarts". They were absolutely delicious and, surprisingly for America, there wasn't even a hint of cinnamon. That made me very happy I can tell you. Along with air-conditioning, cinnamon is one of those things Americans do far too much of.
We passed landscapes smothered in predatory kudzu vines - you could just see the shapes of swallowed trees and bushes under the green mass - like something from the Day of the Triffids. We passed the Weeping Mary Baptist Church. That intrigued me. Could it find common ground with the Catholic Our Lady of Sorrows?
Our lunch pitstop was a town called Hickory. 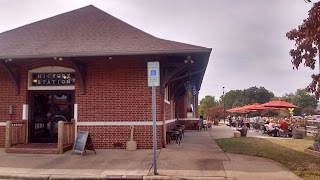 The old railway station had been converted into a restaurant where I indulged in my favourite North Carolina dish, shrimp and grits. The grits were different - crunchy on the outside and laid out in the shape of an anchor. They were pretty good. I used to think of grits as something like the stuff Oliver Twist asked for more of - and in cheapo diners that's exactly what they taste like but served in an interesting way they can be very tasty. 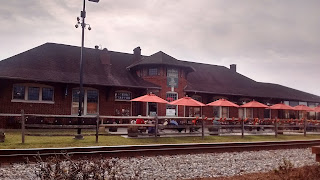 Along with the restaurant there was a liquor store and a deli, where, wonder of wonders, they sold Tomme, a cheese I've only ever seen before in central France, where it's used to make one of hubby's favourite dishes, aligot (ie mashed potatoes and gloopy cheese.) This Tomme had actually come from Georgia but I bought some all the same. (Flash forward: the aligot, when I got round to making it, really  hit the spot). In Hickory they also brew their own beer. It's always unfortunate to come across places like that at lunchtime when you still have to drive. 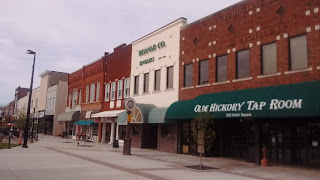 And wonder of wonders Mark 2, Hickory still had trains! 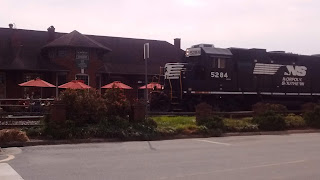 Well freight trains but they were better than nothing. Not quite such a trainspotting paradise as Folkston, Georgia which we visited a few years ago but good enough.
And there were other attractions. 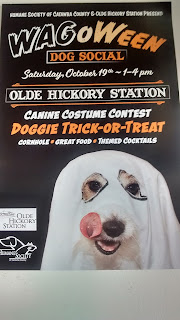 Unfortunately we couldn't have time for everything.

To be continued.
Posted by Alenka at 8:19 PM