At last (as I take a break from the weeds for a while) some stories from the road trip south. Sister-in-law and I have seen a lot of Pennsylvania but we'd never actually stopped in Punxsutawney, which must be about the most unspellable town in America. You might know it from "Groundhog Day" as the place where a groundhog (or woodchuck, as it's called in western New York) predicts the weather. Each 2nd February, the rodent, or, presumably, a convincing double, is yanked out of its burrow and if it sees its shadow and runs back in, there will be six more weeks of bad weather. If it doesn't, there'll be an early spring. A bit like St Swithun's Day in Blighty, except we don't need a fat, furry animal to tell us it's raining.
The actual burrow is out of town and not the one pictured which is, I suspect, something to lure tourists. Likewise the groundhog outside. 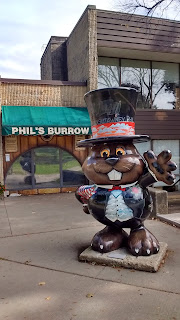 The place must be buzzing every 2nd February. But this wasn't 2nd February and it was pretty darned quiet. Most of the townspeople  seemed to be having brunch in a local eatery. So we joined them 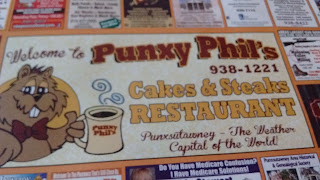 The made as much as they could of the groundhog motif. These were the floor tiles. 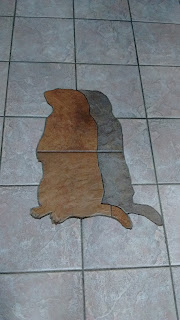 And there was a big cabinet of cuddly groundhog memorabilia. Breakfast wasn't half bad either - waffles, eggs and bacon. Thanks Phil.
to be continued