There's nothing like bowling through West Virginia when the leaves are turning and the sky's a bright blue. 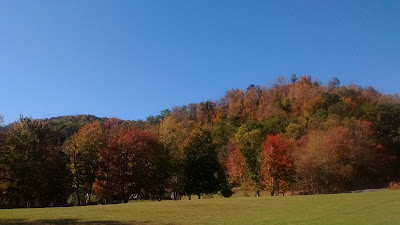 Especially after we'd munched on the American equivalent of a sausage roll - not quite our flaky, greasy sort but pepperoni and Swiss cheese baked into a bread roll - apparently a West Virginia specialty. A bit like the Cornish pasty idea, miners found it handy to carry to work. We washed it down with some pretty good coffee. The little cafe in Grafton was called Espresso Yourself and I definitely recommend it. They had cookie dough ice cream too, an American delicacy a teenage  relative recently introduced me to. Gorgeously decadent to have it for breakfast. 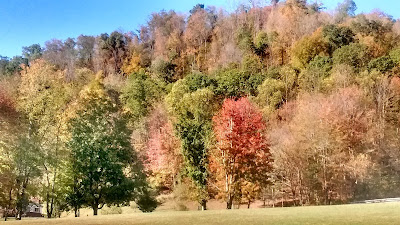 One thing we've noticed more and more on our backroads trips - small one-off cafes often run by eager young people and with interesting names. It's much more fun seeking them out than lazily heading for Starbucks. Of course with Tripadvisor and such it's got a lot easier to find them.
Admittedly parts of West Virginia look a little sad. 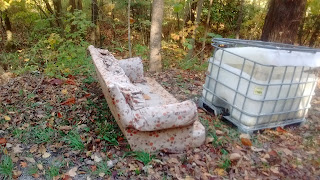 A lad we talked to in the cafe thought things were slightly better under the current President but wouldn't commit himself. On previous trips we'd met people desperate to keep the mines going. "Without us New York City would go dark", one had said confidently. Certain New York City residents should spend time here - a world away from their pampered lives.
Later we encountered a mysterious cabin in the woods. 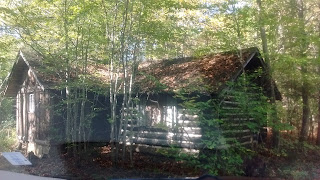 "Mud Duck Cavers". Sorry we didn't have time to check them out. 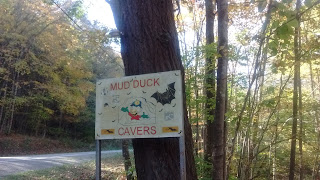 We spotted a sculpture. 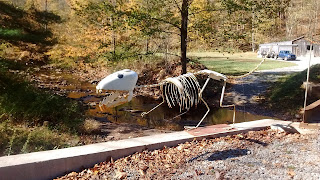 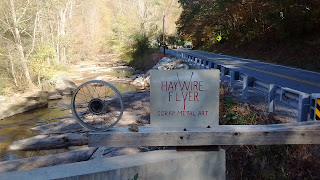 There were bridges and stony babbling brooks. 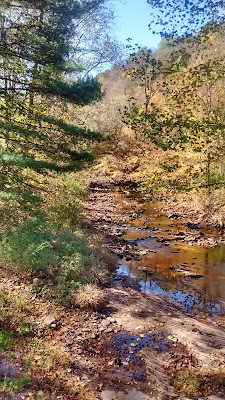 And spectacularly winding mountain roads. Rather a lot of them. "We'll miss this when we're in Florida", I said, "better make the most of it."  Sister-in-law, who was driving, gritted her teeth. 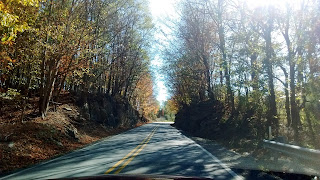 As usual with gorgeous views you can never find the right place to pull off for a photo stop. You see a likely one, yell "Stop, stop!" but it's invariably too late. This one was a bit of all right though. 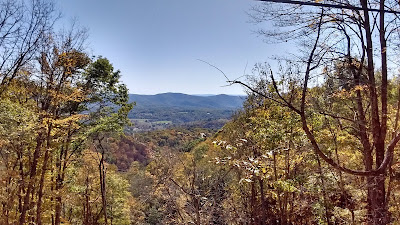 Lunch was in Lewisburg,  a little olde English, a little touristy, 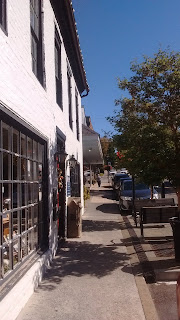 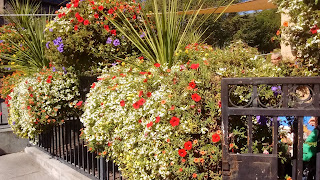 One of those places full of art galleries and loud lunching ladies.It was possibly a destination for people staying at the posh resort of  Greenbrier of blessed memory, not far away. "Let's get a bit of the real West Virginia, what?"  It was a different world.
To be continued.
Posted by Alenka at 7:08 PM