Yes there he is - ahhh how sweet! Our little outdoor friend who looks appealingly up at me, cadging peanuts, along with his little accomplice -er, pal - from the other side of the porch. There have been many generations of Chippy, Chipster, Chipolata et al, scampering around our property - I've rescued them from marauding cats, once splashed water over one that had been KO-d after an inter-chipmunk spat. How could you not love them? 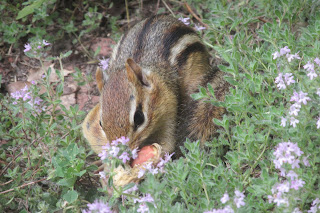 Well things are changing. Fast. I forgave them the network of tunnels under the flowerbeds that makes me think the foundations of our garden must now resemble Swiss cheese. I even forgave them when I spotted them sneaking the odd blueberry or two. But now I realise that I've been emphatically played for a fool.
Let me back up a bit and the purchase of a fine tomato plant covered in promising yellow flowers which I ensconced in its container on the maximum sunny spot in front of the garage. I fed, watered, tended, observed the little tomatoes growing. Then I noticed one lying on the ground. I blamed the fat woodchuck I'd seen waddling across the back lawn. When the same thing happened the next day I blamed the rabbit I'd spotted in the front. Easy, said hubby, we'll just move them indoors overnight. So we did. And next day in broad daylight there was another fallen tomato with just one bite taken out. Next came the nets. Same thing. It was then that I realised there could only be one culprit. Or one culprit and his accomplice. Easy, said hubby, we'll mount the tomatoes on an upturned dustbin with smooth slippery sides. The next day another forlorn tomato with just one bite taken out. They can jump I noted. OK, said hubby, if we sit the pot on the net and tie the net up at the top like a gift hamper... The next day, same thing. Stripes had found a tiny hole at the top of the net. How, I can't imagine. I have now got every green twist tie I can find and stitched those nets up. Goodness knows how we'll ever get the tomatoes out when we want them for ourselves. It's probably an academic question. Because there won't be any left.
Posted by Alenka at 4:30 PM