Eta and the Frogs

A lot of excitement the past few days as the perverse Tropical Storm/occasional Hurricane Eta behaved like a squirrel crossing the road, constantly turning circles and changing its mind about which way to go. So Sunday and Monday were windy and rainy, Tuesday a little better and Wednesday (yesterday) a windy deluge. We brought the garden furniture and hanging baskets in and looped over the curtains in the lanai (the netted cage at the back that Florida houses have, presumably to keep the mosquitoes out). 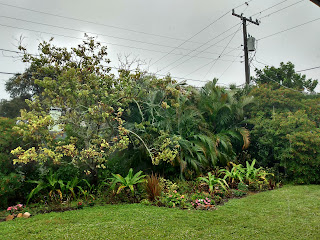 Of course the photo, taken through the netting, doesn't show anything much - in reality the branches were swaying around like seaweed under water and the rain was bucketing down. One neighbour's front garden was a pond. 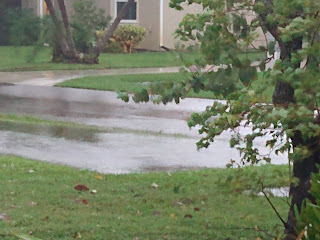 We are tropical storm newbies - this is the worst weather we've been though in Florida but our neighbours said it was nothing as bad as Irma in 2017.  Though phones and hubby's marine radio were constantly buzzing and elongated high pitched beeping with tornado and flood warnings and the lights ominously flickered on and off and on again interrupting the dishwasher and hubby's Zoom meeting. "Please let me back in!", I heard him begging plaintively.
The strangest thing happened when it grew dark. Hubby went to take a look outside and rushed back in saying, "It sounds as though there's some bird in distress." An eery screeching emanated from somewhere underground, getting louder and louder and seemed to be echoed by a similar loud screeching down the street. It was loudest at the drain grill. I thought of those big leggy birds that abound in Florida - perhaps that's the sound they made if they were trapped and struggling, swept into a drain pipe by the storm and powerless to escape. I called my neighbour who said she wasn't about to risk her life for an animal though she might for a human. Then she listened for a bit and said, "It's probably frogs".
"Frogs! So loud? Surely not. We wondered if we should call the RSPCA - or whatever they have here."
"I'm sure it's frogs. They're probably having a party. I know you're a very caring person but I don't think you need worry".
The sounds went on all evening and into the night, multiplying until there was practically a symphony. The screeching began to sound more like croaking. I realised my neighbour was probably right. Well certainly right. Brekekekex Ko-ax Ko-ax. Appropriate for a Greek-named storm.
In the morning, the frogs were silent, probably badly hung over. The water had receded, though in some parts of our neighbourhood, near inlets and such, the water mark had clearly reached half way up their drives. A wet sun emerged and the sky was blue. We went for our morning power walk, passing friends with their dogs, "Got off lightly there, didn't we!"
Posted by Alenka at 10:47 AM