A forlorn traffic sign on Harbor (sic) Drive. Evidently someone ran over it with a steamroller. That's what looks like a bit of their car next to it. 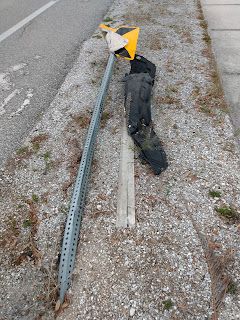 Funny thing is that it's been there for weeks and no one has repaired it.

This is possibly because we are in the midst of battlefield season. The powers that be can't possibly keep up with all the fender benders, fatal and near fatal crashes, mangled motorbikes (and you don't have to wear a helmet here) and all the other detritus scattered over the roads of south-west Florida.

The other day a cement truck careered into five cars on the motorway - they'd slowed down because of an earlier accident, apparently a turned-over truck carrying sewage.

It is carnage every day for many reasons - listed by one of my neighbours as a catastrophic combination of too much traffic in holiday season, too many visiting drivers who don't know where they're going, plus too many people who shouldn't be on the roads at all, resulting in people swerving across six lanes to make a left turn ("Oops - nearly missed my turning - sorry!") flinging themselves into wild U-turns or dithering till just before the next car comes along to scoot across the road. Throw teetering holiday cyclists into the mix and - yikes.  They say it will get calmer after Easter. If there's anyone left.