I came across this in the ethnic foods section of Publix Supermarket: 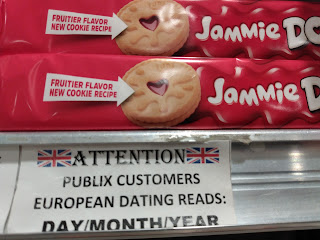 Note that they had to explain about the dates. Here in the US, they do the month first and I'm always getting it mixed up. I nearly got hubby's date of birth wrong on some very important document. I have, I hope, mastered driving on the right but there's always something else to get used to.

Meanwhile it's interesting that they have Jammie Dodgers in the ethnic foods section. I never even tried them in the UK but here I couldn't resist buying them as a Valentine's gift for hubby as I noticed they had little red hearts. Nostalgia I suppose for a Britain that I didn't actually experience. As well as the JDs they have McVities digestives, jelly babies- American kids miss out, only having beans -  and speaking of which, Heinz baked beans - the nasty kind in lurid tomato sauce in a turquoise tin you only get in Britain even though it's an American company. After my first unpleasant experience of baked beans on toast at a schoolfriend's house back in the day, (we had central European cuisine at home) I swore I would never eat them again but at hubby's insistence I'm gradually recovering and coming round to the American version, which can be passably good in a stew.  They wouldn't dream of eating them with orange tomato sauce here.

I once met a very pleasant British lady at the ethnic section. She was looking for Branston pickle, which they didn't have that day. I suppose you never know what's going to be in the shipment from Blighty. We chatted in a polite British way about the weather and such but neither of us felt pushy enough to ask for the other's phone number and I suppose we both regretted it afterwards. Americans would have known each other's medical details, family scandals,  phone number and email in 10 seconds flat.

But one good thing about the ethnic section is that, unlike the supermarket in rural western New York,  you can always depend on it stocking Marmite. So the world has not yet come to an end.